It’s not often you get a chance to buy a commodity for the
less than the price you’d pay during the Carter Administration. That’s how I
know the time is right to start nibbling at companies in the sector. The
underlying asset is a true bargain – no matter how you dice it. So the
companies that can bring this particular commodity to market and remain
profitable at today’s prices are destined to be huge profit machines in the
coming years as the price of all “real stuff” continues to rise.

But if you’re
reading this letter right now, you probably don’t care one lick for this
commodity. It’s the opposite of sexy commodities like oil or gold. In some PC
circles it might even offend. It’s certainly not one of those commodity
investments that you’ll brag to a neighbor about at a cocktail party or over
a back-yard cookout.

The thing is, this boring, unloved and slightly un-PC
investment has creamed the broad market over the past 23 years. 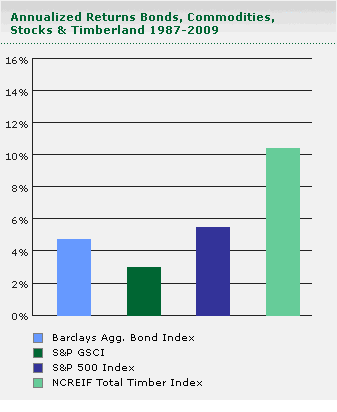 I’m talking about timberland and lumber. And before I get to
the upside for this asset class, I’d like to point out some of the more
obvious downsides. That’s the healthy way to look at any investment:
understand the downsides first.

The big one is
housing. It’s an important part of any lumber price equation. And to be
honest, my personal view for housing is that we have a little bit longer of a
deleveraging to get through before we’ll see the kinds of housing starts that
we saw during ‘normal’ periods of growth. If it’s a worst-case type of
scenario, I believe it could take another ten years before we hit a true
bottom in housing prices.

Even if we experience the type of inflation I’m expecting
over the next decade, it’s possible that housing prices could continue to
stagnate. That’s because there’s no world market for housing. People in China
don’t care about American suburban tract houses. They do care about oil,
wheat, gold, etc. – but houses are the opposite of those types of fungible,
in demand commodities. So it’s possible that lumber could lag those other
commodities, for the simple reason that housing could languish.

Bad news in the housing construction sector is probably more
than enough to scare off most prospective timber investors.

Timberland companies, almost without exception, are saddled
with large amounts of debt. The six biggest companies all have at least twice
as much debt as free cash. That makes them risky businesses to own should we
enter a deflationary period. Even as their debt stays the same on a nominal
basis, a rising dollar would make it more expensive, especially for those
companies with international exposure.

So, those are two of the biggest mines in the minefield. And
there are plenty more regular mines that you’d encounter owning any type of
security.

But I still like some timberland investments. Take a look at
the price of lumber over the past 40 years, and you’ll begin to see
why. 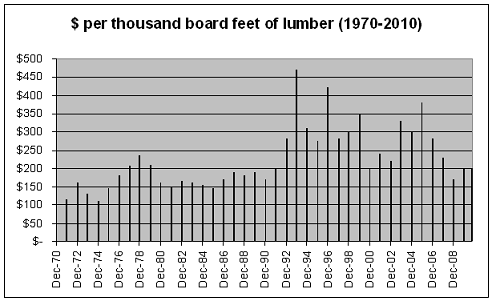 Today, lumber is selling for a little less than the price
you’d pay in 1977. We’ve seen some spikes in the past 20 years, but nothing
approaching the meteoric rise of gold, or even the steady climb of
oil.

And I challenge anyone reading this letter to send me an
email at [email protected]
if they can think of any other good, service or commodity that’s selling for
less than it did in 1977.

The weird thing about lumber is that it isn’t even keeping
pace with the price of timberland. Timberland has crept up in price steadily
over the past 40 years, not as far or as fast as houses or commercial real
estate, but it’s not as cheap as it was in 1977, for sure.

And valuing timberland companies is much easier than valuing
a tech stock or even a blue chip energy company. They have very few income
streams, and they’re fairly simple to understand. A timberland company can
either sell its land or sell its timber. Obviously, you don’t want to own a
timberland company that’s selling off huge plots of land. That situation
can’t last forever, and eventually they’ll run out of land.

But most timber companies don’t sell off all of their land,
or at least not any faster than they buy new land.

In any event, I value timberland companies first and
foremost at their price per acre.

Today, I’m going to tell you about one timberland companies
with among the lowest price per acre. To find the price per acre that you’d
pay as a shareholder, I simply divide the company’s total timber acreage by
the number of outstanding shares, then I find out how many shares you would
need to buy to own one acre and multiply that number by the share price.
Here’s one example:

Plum Creek Timber (NYSE: PCL) is the
biggest private landowner in the United States. They have over 7 million
acres of timberland, and 161.6 million shares outstanding.

I’ve done this with
five or six of the biggest timberland companies, and Plum Creek’s price per
acre is among the lowest. It also pays a 4.9% dividend.

For me, finding out how much you pay for the acreage is more
important than looking at price to earnings or any other metric. Obviously,
those fundamental numbers are important, but they need to be viewed through
the prism of the price per acre.

If you’re paying a huge premium for the acreage, it’s an
uphill battle to see any real appreciation in the value of your holdings. And
make no mistake, when you become a shareholder of a company, you’re a partial
owner. If you don’t pay attention to the underlying value of a company’s
assets, and you only look at earnings or cash flow, or debt – you’re missing
the forest for the trees.

Yes, we need to understand the value of the business
operations, but for many companies, and especially companies in the resource
sector, the asset IS the business.

For Plum Creek, you’re paying a bit of a premium on a price
to earnings basis, but that’s a small price to pay for the largest private
owner of real estate in America. Should lumber prices rise, I think this
company will be ideally suited to profit. I’d recommend nibbling at shares
under $35, which is a slight discount to today’s prices, but I think patience
will be rewarded. Any bad news in the housing sector will let us pick up
shares in dips.

disclosure: no position as of this writing