When I was 10-12 years old, I remember going down to the party store and buying the kinds of mostly harmless fireworks that they used to sell to kids. For less than $10, you could buy a paper bag filled with smoke bombs, poppers, snappers, sparklers and maybe a couple cherry bombs.

Minutes later in a parking lot or field around the corner, my friends and I would find ourselves looking at a pile of burned paper, ash and other refuse. The full result of our hard-earned and easily spent cash amounted to little more than some loud noises, some flashing lights, some smoke – and then nothing.

Well, yesterday the Federal Reserve seemed to come to a similar conclusion about the effects of its money printing. I’m sorry – money printing is what I call it. They call it quantitative easing (QE).

In their latest Federal Open Market Committee meeting notes, they say, "economic growth so far this year has been considerably slower than the Committee had expected."

Before I describe the fireworks, let me give you a brief run down of how much we spent.

In November 2008, the Federal Reserve announced the first injection of QE to the tune of $600 billion.

Then just four months later, they decided that $600 billion wasn’t enough. So in March 2009, they announced an additional $1.2 trillion of QE.

Then last November, they announced a further $600 billion, in addition to rolling over $300 billion worth of Treasuries into more QE.

What do we have to show for it?

Here’s a chart (courtesy of Robert Murphy of the Mises Institute) that shows you exactly what kind of fireworks we got for $2.7 trillion: 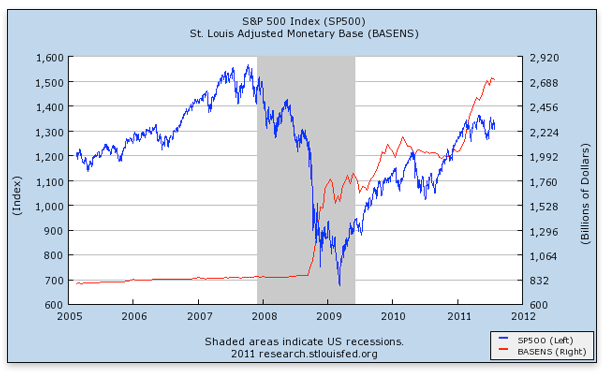 This chart is a little out of date, because it doesn’t show much of the crash of the past week. But you can see that we got a stock market rally. That’s the fireworks.

But now that the QE is out of the bag, and stocks are starting to fall again – the market is like a group of bored kids staring at a pile of burned paper in a parking lot.

Ben Bernanke and the rest of the Governors of the Fed tried to goad on some more fireworks by telling the market that they pinky-swear to keep interest rates at zero for the next two years.

But that wasn’t enough.

If they want to keep the fake rally going, we’re going to need another bag of fireworks. More QE.

The real question is: are we beyond the point where another round of QE will pump up stocks again?

I’ve said it before: Ben Bernanke only knows how to print money. It’s the only thing he has ever done. I think we’ll see another round of QE in the future. In the meantime, zero interest rate policy will force people to buy assets.

Money is leaving stocks, and for now, heading into Treasuries and gold.

When people realize that Treasuries are a losing bet as Bernanke fires up the presses again, I don’t think we’ll see people fly back to stocks. I think they will go to gold.

And I advise continuing to add to your gold position as long as Ben Bernanke is keeping rates low.

I know I sound like a broken record right now, but we’re through the rabbit hole.

How would you like to make thousands in extra income a month, while working only a few minutes a day? Well, now you can. I will show you how you can turn stock price movement into steady reliable income.

You’ll get the easy-to-use tools you need to effortlessly earn thousands a month in the latest FREE TradeMaster instructional video: "The 5-Minute a Day Investment Plan."

Click here to see more articles from the Resource Prospector.