Continued from A Gold and Silver Buyer's Guide Part I

Further Notes on How to Buy Gold and Silver

I've had some people write in and ask, "How much gold should a person buy, as a percentage of their wealth?"

Some people say that you should own 5% and sometimes 10% of your net worth in precious metals.

I wouldn't put such a hard and fast number on it – instead I'll give you a simple metric that will help you decide if you have the bare minimum of gold or silver that you might need in a worst-case-scenario.

After all, we're not buying gold and silver necessarily because we 100% believe that a currency crisis is inevitable, or that our dollars will be rendered worthless, no ifs ands or buts.

I buy gold and silver because of the increasing likelihood of that event, but I'm not absolutely certain that such an event will come to pass. If I was absolutely certain, then yes, I might transfer 70-80% of my net worth into gold, silver, durable goods and potable water.

I won't tell you the exact amount of gold and silver I own, but I will tell you a simple metric that I've told my family and close friends to use.

I don't know if more than one or two of them have listened (another indication that we're not yet in bubble territory) but here's my rule of thumb:

Look at your budget for your monthly living expenses. Stuff like food, water, transportation, clothes, heating oil, etc. Add it all up to find your average monthly cost of living. Multiply that number by six, and then buy a mix of gold and silver bullion equal to that six month estimated cost.

Assume we enter into a real life, 'as seen on TV' currency crisis, with food riots and long lines at the gas station, wheelbarrows filled with cash to buy a loaf of bread, etc. In this circumstance I estimate that at the VERY least, you'll want to have enough gold and silver to cover six months' worth of your living expenses.

Six months would give you enough time to figure out the next step – whether that's moving in with relatives across the country, or finding a new home in a different area – even moving overseas, or starting a large garden or small business that would be in demand in the aftermath of a currency crisis.

Hopefully, six months of living expenses isn't more than 5% of your net worth – it's probably also an affordable amount to get started with.

Anything more than that six month supply is extra security for your bottom dollars.

I wouldn't advise putting more than 30% of your net worth in gold or silver. That's way too many of your eggs in one basket.

"Before I purchase anymore gold coins (20 Franc Swiss)… do you have any concern about Goldline?"

I'm going to bash Goldline – but first, Tom brings up another type of bullion I didn't mention earlier in the report…

I actually like the 20 Franc Swiss coins. They're not quite as recognizable as the British Sovereign, but they're a nice alternative. They have an interesting history as well. Historically, these 0.1867 ounce coins (a little less than 1/5 an ounce) were given as wedding gifts to newly married couples.

They're also attractive, and since they're no longer minted, they sell for a small numismatic premium above spot. They're not really very rare – just rarer than regular bullion. I don't really have any use for "rare" or numismatic coins. I buy coins for their bullion content and their recognizability. 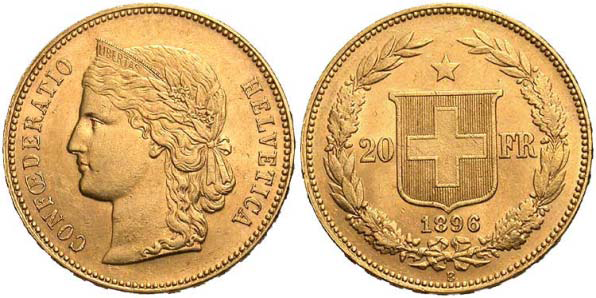 As I said, these coins have a gold content of 0.1867 ounce – which would mean the gold content is worth about $250 at today's spot prices.

The last time I checked, Goldline was selling this coin for over $425.

I won't even dignify this company by linking to their website. At the risk of getting sued by this firm – I think they give gold retailers a bad name – and I see absolutely no reason to do business with them.

The company I buy some of my gold from, Blanchard Online, sells this coin for $286.87.

That's about 16% over the current spot price of the gold – but that seems to be a competitive price for this semi-collector coin. I've seen it for a little bit lower, but not by much.

In Goldline's defense, I don't begrudge them their ability to sell bullion for whatever price they want. We don't need laws against this kind of operation. If you don't do your homework and shop around, then you will probably pay too much.

Caveat emptor – the latin for "buyer beware." It's a rule that applies to everything from a can of soup to gold bullion to a new home. Know the product that you're buying inside and out before you buy it, or you will inevitably pay more than you need to.

And that advice should be extended to any gold retailer you buy from. You are making a responsible decision to buy gold and silver. Be responsible for your own purchases by making sure that you're buying the right products for your specific needs.

Your best defense against getting swindled is to have an airtight plan. Stick to the plan, and you'll come up smelling like roses even if the dollar turns out fine.

I've had people ask me when I'll sell my gold, and the answer isn't as straightforward as you might like, but I think you can come to a helpful conclusion based on my answer.

First off, I'll tell you that it's not likely that I'll sell ALL of my gold and silver. I'll probably always have a few months' worth of expenses in silver and gold – just in case.

Below, I list three circumstances that would cause me to consider selling my physical precious metal. You'll note that these three reasons are similar.

1) It might seem foolish, but I'm waiting for the opportunity to buy stocks as an asset class when the Dow Jones Industrial Average (DJIA) is nominally about the same as the price of one ounce of gold.

If it sounds like a nutty strategy, I'll remind you that the DJIA and the price of gold traded very near nominal parity in the early 1980s – at the beginning of the great stock market bull run that lasted until early 2000. 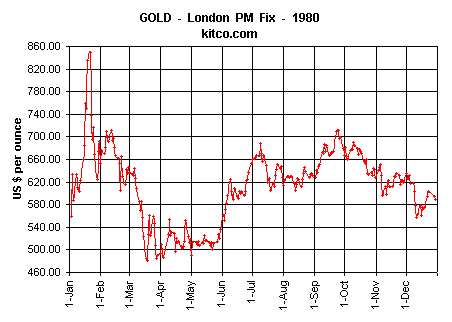 So, that would be one instance that would convince me to sell my gold.

I don't know if it will ever happen, of course.

2) Another more likely scenario is that the price of gold, silver and other commodities will rise well above the comfort level of the Federal Government and American consumers. In order to deflate the prices of these assets, and stop what would then be massive amounts of speculation, the Government would have to raise interest rates above and beyond the level of perceived inflation.

You might remember that Paul Volcker did this exact thing in the early 1980s: he raised interest rates to absurdly high levels.

With Government bonds, corporate bonds, CDs, and other "safe-money" investments yielding such high interest, people were happy to sell their gold.

So as soon as the Federal Government is forced to start raising rates far and above the rate of inflation, that will be a time to start selling your gold and silver. As an aside, I believe this circumstance is a long way off. Gold prices doubled in 1979, from under $250 to over $500 an ounce – and that was in a period of double digit 10 Year Treasury bond yields. Even high rates can be bullish for gold prices if they fall short of the inflation rate.

3) The third instance that would cause me to sell my precious metals would be if I started seeing some other asset selling for ridiculously cheap prices. Maybe it's another commodity, maybe real estate, maybe foreign stocks or currencies – it could be anything.

But if something else is extremely cheap, it would be silly to continue holding large amounts of precious metals.

You'll note that all three reasons I'd sell aren't in any danger of happening soon.