There are literally
trillions of reasons to be bullish on gold – but I recently received a letter
from the Social Security Administration (SSA) that further cemented my belief
in the uptrend for gold (and silver).

“…by 2037, the Social Security Trust Fund will be
exhausted and there will be enough money to pay only about 76 cents for each
dollar of scheduled benefits. We need to resolve these issues soon to make
sure Social Security continues to provide a foundation of protection for
future generations.”

I’ve done the calculations, and I now pay about 7% of my
income in FICA taxes, an amount I realize also includes Medicare – which is
of course, matched by my employer. So, that’s 14% of my potential income
gone. It’s more than I currently save for my own retirement.

I’m outing myself here, but everyone pays about 7% of their
income into FICA, unless they make over $106,800 a year.

My point is this: the program isn’t going anywhere because
almost everyone pays out a big chunk of their paycheck every year, and
they’re banking on getting their “entitled benefits” upon retirement. That’s
how FDR set it up 75 years ago. He knew that once people had the money
forcibly taken from them, they’d expect to get something back.

But even by the
rosy estimates of the SSA, they’ll only be able to pay these benefits in full
for the next 27 years. I’m guessing that Mr. Astrue thinks that people my age
will look at this information and come to the conclusion that we have to put
more of our money into the SSA fund, to make sure there’s enough for us when
we retire.

So, we’re going to find out what happens when an
irresistible force (raising taxes) meets an immovable object (cutting Social
Security). One or both of these scenarios has to happen (and soon!) in order
for the SSA to continue to pay regularly scheduled benefits for the
foreseeable future.

I don’t foresee anyone in Congress putting forth a bill that
will raise FICA taxes OR cut Social Security. Either one of these proposals
would be election suicide.

My estimates for Social Security benefits are somewhat less
rosy – if the fund makes it to 2037 I’ll eat my hat. This year, for the first
time since the recession of the early 1980s, the SSA paid out more than it
took in.

But the situation has very little in common with the 1980s.
We have much higher government debt, less personal savings, more unemployment
(in real terms) and less control over the world’s resources than we did back
then.

Okay, so if Congress is too cowardly to raise taxes OR cut
Social Security, what will have to happen?

Simple. The Federal Reserve will print the difference, and
deposit it with the Treasury. In fact, it’s already happened, basically. You
might not realize it, but much of the Social Security Trust Fund is already
invested in US Treasuries. It’s a roundabout way for the government to tap
into this “separate account” and move it to the Treasury’s balance
sheet.

Sure, they have to pay the Fund back with interest, but that
interest comes from the Treasury via new purchasers of US Treasury
debt.

One of the biggest holders of US Treasury debt today is the
Federal Reserve. Last year, the Fed bought 80% of the Treasury’s $1.5
trillion in issued debt. 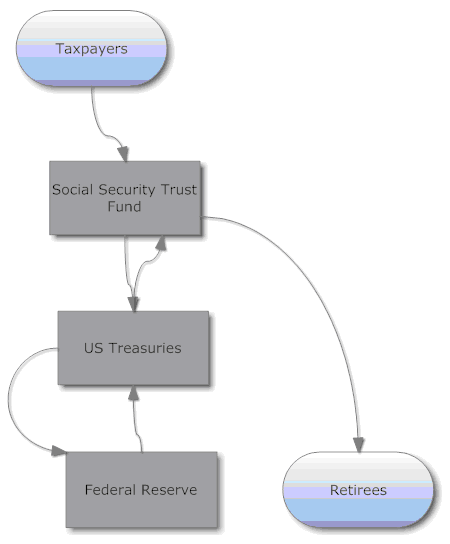 It’s a little confusing, but in essence, the Federal
Government is borrowing money from the Social Security Fund, and paying it
back with dollars from the Fed. Where does the Fed get those dollars? I’ll
give you a hint: they didn’t exist until the Fed gave them to the Treasury –
so they created them out of thin air.

Of course, Social Security is just one substantial tip of
the iceberg. There are plenty of other “entitlements” and government programs
that require the assistance of the Fed’s printing presses for their funds.
There’s some we don’t even know about.

So you have to ask
yourself two questions:

1. Is it likely that the Government will slash these
programs or substantially raise taxes in order to keep the gravy train
rolling?

2. What will happen to the dollar as these obligations are
increasingly met by funding from the Fed?

To me, the answers are painfully obvious. And I’m buying
gold and silver.