That lovable socialist congressman, Dennis Kucinich again showed the depths of his ignorance about how markets work with a bill he introduced last week.

The name of the bill? The Gas Price Spike Act.

If this bill is passed, it would levy taxes up to 100% on any "excessive" oil company profits.

Who decides what's excessive? Why, Mr. Kucinich (pictured below with his mismatched wife.) 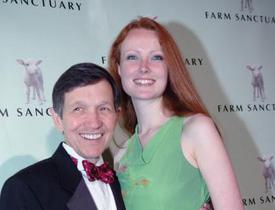 Walk through this logic. Kucinich thinks oil and gas companies make too much money – and their excessive profits hurt Americans because gas prices are too expensive.

So the problem is that gas prices are too high. I don't know if anyone would disagree with the sentiment.

It doesn't take an advanced degree in business or economics to see what the result of higher gas prices would be.

Of course it would raise the price of gasoline – not lower it.

Why would an oil company produce more oil at a certain price if it made zero profits? It wouldn't! So… the next step would be oil shortages, which would inevitably spike prices further.

So you have to wonder – is Kucinich that stupid? Is it likely that he could really think a tax raise will lower gas prices?

My belief is that Kucinich knows exactly what he's doing. He wants to push through this bill in order to give bureaucrats and government cronies a bigger piece of the pie. Once the government puts its nose in the tent of excessive oil prices, it's likely to seek out other industries with excessive profits to try to control.

The worst part is, it's a self fulfilling prophecy. If this bill gets passed, it would inevitably spike oil and gasoline prices. Then Kucinich will claim that the first bill didn't go far enough, and the Feds need more power, more regulations, more control, higher taxes and greater oversight.

We've seen this playbook before.

And while I'm not convinced Mr. Kucinich's bill will pass into law anytime soon, I'm sure this legislation or something like it will rear its head the next time prices at the pump increase – which they inevitably will.

This bill is just a small example of how are dangerously over-indebted government will lash out against you and me when they realize they can't simply paper over all of their problems with more Federal Reserve Notes.

They'll pass laws which will have the opposite of their advertised effects, all in a ruse to seize more power and control.