Gold is one of the rarer elements in the earth’s crust. That’s one of the reasons it functions so well as a medium of exchange and store of value: it’s nearly impossible to flood the market with gold.

That’s all the more true when you look at the amount of gold in existence compared to how much of it gets mined and used up every year.

Very little gold gets mined every year, at least in comparison to the “above-ground” supply. So it’s a stable gauge for measuring the price of nearly anything else. It’s like a ruler that stays about the same length – while everything else shrinks and grows at much faster rates of change.

Compare gold as an asset class to another favored asset class: stocks.

Unlike gold, the amount of stocks and the value of each stock can change massively from one year to the next. The Dow Jones Industrial Average was created only 90 years ago, but of the 30 original companies, only three remain in the index.

Conversely, there’s about the same amount of gold today as there was 90 years ago. A little more, but not much.

So forget about the dollar as a way to measure and account for stocks. The dollar is like a ruler that shrinks 2-5% every year on average – so at best, it’s useful for a few months at a time as a true gauge. At worst, you shouldn’t trust it at all.

Right now, gold is telling us one thing about stocks – namely that they’re getting cheaper by the year. 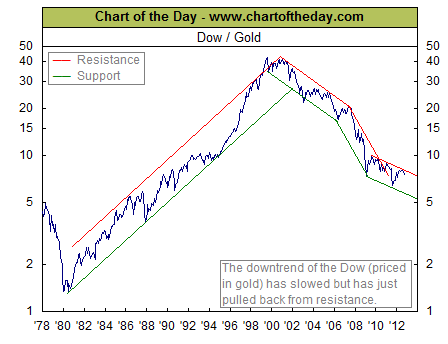 You can see from this chart that priced in gold, stocks are as cheap as they were in the early 1990s – and that also, stocks are in a strongly sustained down trend. In essence, every ounce of gold buys about seven units of the DOW.

We might expect stocks to resume an uptrend once the ratio gets below five – according to this ratio.

If you believe (as I do) that gold is a solid way to “price” other assets because of its characteristics of being rare and stable in quantity – then the simplest way to profit from this trend is to wait for it to reverse.

When it turns around, sell gold and buy stocks.

I know this “plan” is easier said than done. The only quantity that’s significantly rarer than gold in this market is patience. So if you have the patience to wait for this trend to play out, I believe you’ll maximize your gains in gold, and you’ll be able to buy stocks at multi-decade low prices.