I’m forcing myself to turn away from the obvious debt ceiling story that’s playing out right now.

For the record, I don’t believe that the debt ceiling will have any long term effects that won’t be completely superseded by the fact that our debts are already much too high. We’ll default sooner or later. The debt ceiling is an imaginary line that will be crossed regardless of how politicians vote. Interest rates will rise. Social Security will go unfunded.

All of these things will happen – not because our leaders failed to act to raise taxes or to cut spending – but because our debts are so incredibly large and our leaders so clueless that they can’t even conceive of how to solve the problem.

I’d prefer sooner for the simple reason that our debts are a millstone on the necks of honest, thrifty Americans who just want to live their lives and not see their hard earned cash inflated or taxed away by know-nothing politicians on both sides of the aisle.

So, instead of worrying about the debt ceiling, and making it a mantra to be repeated over and over until it’s "fixed" I suggest breaking out of that line of thinking and looking for opportunities.

One of the most interesting opportunities I’ve found recently is in timber.

I don’t mean you should go out and buy trees or 2X4s – but if you’re interested in a long-term investment, you should look into the iShares S&P Global Timber & Forestry Fund (NYSE: WOOD).

This ETF holds a variety of timber, timberland and other wood-related stocks – including the Chinese timber giant Sino Forest Corporation – which I realize has recently been creamed in yet another fraudulent investment scandal.

Another way to look at the Sino situation is that it’s selling for 70% cheaper than it did just a couple months ago. Not a bad time to buy – if the company is on the up and up. And even if it isn’t the fund holds less than 10% of its assets in Sino – so it’s not the end of the world if it goes belly up.

This ETF also has good diversification to counter-balance any bad news out of a single economy – as you can see from the pie chart below: 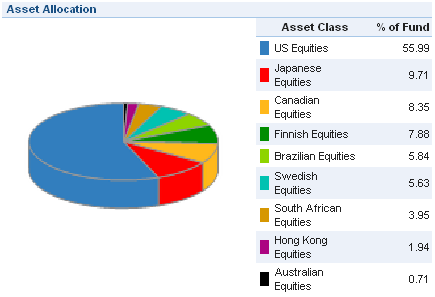 On the bright side, timber is one of those long term investments that can reward your portfolio in good times, and protect it in bad.

That’s because timber literally grows on trees. Most timber-grade trees grow an average of 6% per year – which means that every year you don’t cut them down, they’re worth about 6% more.

That’s real growth you can count on – because while we can’t say for sure what will happen with the world economy, we can probably safely say that trees will keep growing, and timber will be in demand eventually.

And while we wait for timber demand to pick up, this ETF pays a dividend yield that’s competitive with 10 year US Treasuries.

I’d look into this fund only if you are interested in a long-term holding with a modest income aspect. Trading in and out of timber investments is probably more trouble than it’s worth, but for the long haul, wood is as stable an investment trend as you’re likely to find.