I’ve asked my friend George Stubos, an expert energy and commodity investor to shed some light on something that I’m not quite up to speed on just yet: Mongolia.

I believe this country will be home to some of the best resource opportunities in the coming decades for the simple fact that we already know it’s home to huge reserves of just about every non-agriculture commodity in existence.

Gold, silver, coal, oil, uranium, phosphate – there’s plenty of everything. And it has the additional benefit of being ideally situated between two economic powerhouses: Japan to the East and China to the South.

I know George has personally been a part of some big projects in Mongolia, so more than anyone else I know, he has an inside perspective that you’re just not likely to hear anywhere else.

Today, George will be going over some of the basic sights and experiences he’s had in Mongolia.

Flying in to Ulaan Bator, Mongolia (everyone calls it UB "Ew Bee") from Beijing, China on a clear frosty day in February one immediately notices that the city looks like a giant skid mark set between hills of cottony white snow.  The source of the thick brown haze that hangs over the Mongolian capital is burning coal smoke from the four Soviet-era power stations, whose smokestacks stand like goal posts around the city. In addition there are thousands upon thousands of coal burning ovens inside the traditional Gers (or yert) that still house most Mongolians in the squalid suburbs around the commercial center.

I first visited Mongolia in May 2005. It’s a place that I had no mental image of, so I was not surprised or disappointed as I started to make my way around UB to discover what it had to offer.

Ivanhoe Mines (NYSE: IVN) was already a big story, so I was not alone as a foreigner looking for opportunities there. I was pleasantly surprised by the number of Irish themed pubs like the "Grand Khan Irish Pub" which serves pints of Guinness stout and the presence of an authentic French Bistro with a nice Steak au Poivre as well as the Brau Haus beer garden, complete with a menu of bratwurst and sauerkraut.

Beyond the variety of food I found the Mongolian people friendly and a hearty bunch. The guys all have to serve in the military, and I don’t think they mind. These people are a seriously tough lot. Mongolia is a place where men can drink a lot of vodka and fight (or watch the fights) and fornicate.

I imagine that the old West was a little like this before the settlers all moved in and the Army killed all of the Indians. A pleasant surprise was the almost complete lack of firearms among the civilian population. The only weapons I saw during my visits has been at a gun range (a vast array of Soviet made weapons) and on the belt of the police.

Anyone who has been following or investing in the meteoric rise, and recent turbulence, in commodities can not ignore copper as a key base metal. So important in infrastructure, especially in developing economies like China, Copper is a barometer of growth. Similarly the rise of Gold as currencies and government printing presses has had their field day in the past few years as the Fed has tried to print their way out of the 2008 financial crises has acted not only as an inflation hedge but also a safe haven for capital.

Mongolia has these and many other commodities in abundance, many of them completely untapped, undiscovered and undeveloped.

For example, Oyu Tolgoi (or "OT" in local parlance "lookout hill" in Mongolian) is the biggest undeveloped copper and gold resource in the world.  How big? In September 2010 Oyu Tolgoi reserves were placed at 81.3 billion pounds for copper and 46.4 million ounces for gold.

The OT Deposit sits in the Gobi Desert in Mongolia butting up against the northern-most border of China. 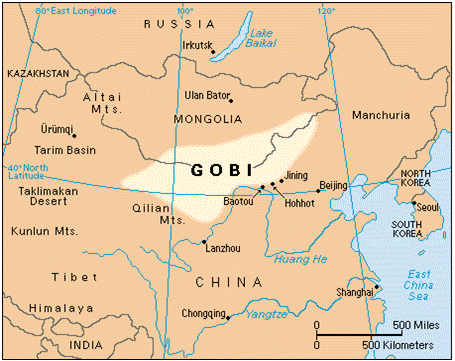 Discovered and expanded by Ivanhoe Mines, along with its partner and major shareholder Rio Tinto, this deep underground deposit has just reached its half way development point, as marked by a ceremony at the mine site September 25th  2011.

The OT mine and its development can basically tell the story of Mongolia, a resource rich, yet desperately poor and infrastructure challenged country trying to find its way to modernization and wealth.

The farthest reaches of the Soviet Empire in Asia, sandwiched between Siberia and China, Mongolia has been the front line of the Sino-Soviet rift during the cold war, "Outer-Mongolia" was truly as it has been used in colloquial terms, the middle of nowhere.  I have been out to the desert where Russian tanks and artillery were once stored in case open hostilities ever erupted between the Red Giants.

As one of the Soviet Republics, the Mongolians were treated as guests in their own house. Ruled by Moscow and taught to speak Russian, even the Mongolian character script writing was adapted to the Cyrillic alphabet, appearing to be Russian. Then one day, in 1990 the Russians just picked up and left! Of all of the former Soviet States (or the "STANS", Tajikistan, Uzbekistan etc.) it can be said that Mongolia has emerged as the only true Democracy, without dictators or rigged elections that have plagued the other former-Soviet States.

One of the benefits of this 70 year occupation is the incredible 97%+ literacy rate in the country.

It also makes it an ideal place to look for growth. High literacy rates and a hardworking population means it’s absolutely ripe for development and entrepreneurial progress.

For one small example, taking a taxi cab in UB is always interesting as it is highly likely that the cabbie has at least one university degree and speaks two languages.

I believe Mongolia is on the very edge of huge growth and opportunity. Tomorrow I’ll be going into more detail about some of the current headwinds – and how these opportunities might pan out.

Thanks George, we look forward to hearing more about it.

George Stubos is President of Prominex Financial Services Inc. A Venture and Private Equity Capital business specializing in Start-Up Companies. He’s the founder of Shaman Resources Ltd. a company that has been awarded a Production Sharing Contract by the Government of Mongolia (2007). He’s a Founder and Director of San Telmo Energy Ltd, a successful oil and gas exploration and production company in Western Canada. He has been involved in the raising of capital for early and developmental stage companies for more than 15 years. He’s also a member of the Association of International Petroleum Negotiators (AIPN).