So when you get the chance
to buy oil companies at cheap valuations, you should pounce early, often and
with unwavering decisiveness. Oil’s not
going anywhere – it’s going everywhere.

That’s why it’s important to
get your portfolio in front of the long, inevitable trend of higher oil
prices. It’s the biggest and most
important market. That’s why I sincerely
hope you think about buying today’s cheapest oil company in the stock market.

But before I tell you about
this company whose shares are currently selling close to its 2009 lows, I’d
like to answer the question: Exactly how huge is oil?

These platitudes about oil’s
importance and size frequently get passed around by members of the popular
media like bottles of Gallo Rosé wine at a Grateful Dead concert – so indulge
me to show you the exact numbers to help you wrap your head around the sheer
magnitude of the situation.

Back in
April of this year, a new daily volume record was set on the Intercontinental
Exchange (ICE) for West Texas Intermediate Crude (WTIC) contracts – with an
astounding mark of 464,381 contracts traded in just that one day. Each contract trades 1,000 barrels of
oil.

With oil prices around $84
that day, each contract was worth about $84,000. So, it means that over $38 billion worth of oil contracts traded hands in that one day alone.

Granted, that was the daily
record, but the WTIC futures regularly bypass the $30 billion mark on an
average day. To put it in perspective,
$38 billion is more than the annual earnings of Wal-Mart (NYSE: WMT), the world’s largest corporation.

Furthermore, WTIC is just
one type of crude oil, traded on just one futures market. There are at least a half-dozen other crude
oil contracts in a handful of different futures exchanges.

And as I said earlier, when
you get the chance to buy an oil company on the cheap, you have to act quickly
and decisively. Oil is the biggest game
in town, so if you’re not buying the best companies in the sector then they’re
cheap, then you’re missing out on some of the most reliable gains in the whole
stock market.

If you’ve been a Resource
Prospector reader for very long you’ve probably heard me talk about
this company.

I mentioned
this company yesterday, but I also put in a target price almost one month
ago.

“Not to compare the 1989 Exxon (NYSE: XOM) Valdez
disaster to the current Louisiana
tragedy – but in terms of creating a buy opportunity, I think it’s a fair
comparison.

Investors who bought Exxon one month after the Valdez tanker ran aground
have seen their shares appreciate nearly 800% in the ensuing 21 years. That’s
the kind of gain you can only get by buying when something is cheap and hated.

Right now there’s no question that BP is hated. Our popular President is
leading the charge against BP. President Obama has since changed his mind about
Gulf drilling, and has shut down all new exploration and drilling in the Gulf.
Despite how you feel about oil companies, and BP in particular, it’s hard to
imagine a scenario where oil prices will fall given the current climate.

My point is: BP isn’t going anywhere. They’ll likely get sued, possibly
for billions of dollars. They’re on the hook for at least $3 billion in clean
up costs. But they have so much income from so many other locations outside of
the Gulf of Mexico, and they’re sitting on over $10 billion in cash, that
there’s a stellar buying opportunity in the near future for BP.

If BP stock approaches 2009 lows of $35 a share, I think it would be
foolish not to buy. Maybe it’s icky, but there’s nothing icky about potential
800% gains.” 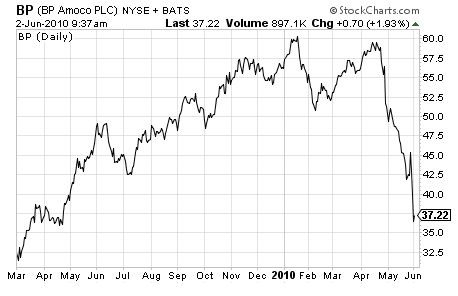 The 2009 low for BP shares
was just below $32.50. And prior to
that, the last time this stock traded in the mid-$30s was back in 2003. That’s
an important psychological level for this stock.

But consider this: when BP
sold for $32.50, oil was $35 a barrel. That meant much lower profits for BP – so it’s understandable that the
stock was so cheap. Today, oil is cruising
above $70 a barrel.

I’m sure that the Gulf leak
will hit the bottom line for BP – but I don’t see how it could be as disastrous
as $35 oil. The point is, BP is way
oversold right now, and it’s largely due to negative investor sentiment, not
based on the long-term fundamentals and earnings power of this oil giant.

Right now,
I’m trying to convince my wife to let me buy shares of BP in our brokerage
account if it hits $35, but she is staunchly resistant. If I can convince her, I’ll gladly buy in
tranches all the way down to $32.50, and then back up the truck at that price
if it bounces.

If not, I’ll be satisfied
with the near 10% dividend BP currently pays. Even if they cut their dividend, I wouldn’t mind owning the third
largest oil company in the world at barely 6 times earnings. It’s an unbelievable price for this blue chip
company, and I sincerely hope that some of you are able to convince your
spouses or yourselves that despite this horrendous spill – BP is a great company
to own today.

Remember, being a contrarian
investor sometimes means holding your nose and doing the opposite of what seems
right. BP fits the bill. I know my colleague and Energy World Profits editor Ian Wyatt has been “long” BP shares for
a couple months now, and is adding to his position in the stock right now. Ian just released a full report on another
group of oil companies that are currently drilling in an American oil resource
known as the Bakken. Some estimates put
this oil reserve at over 400 billion barrels of oil, which dwarfs any oil find
in the past 30 years. Click
here for the full write-up on this opportunity.