There are two rules about making successful predictions.

Well, I’m going to break one or both of these rules today.

In short the broad stock market is due for at least a moderate pullback.

Moreover, the broad market has rallied for an unbelievable 3 straight months with nary a pause.

That kind of run just doesn’t happen. There has rarely been a better time to look for an exit if you’re a stock investor. 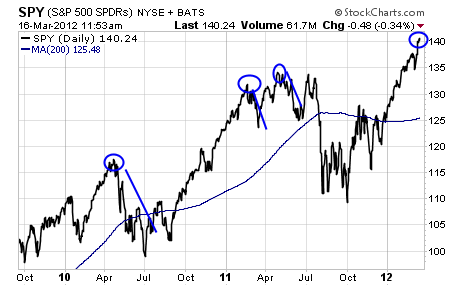 And in the past 2 years, we’ve seen the market correct between 3-10% after it hit such an extreme high.

Let’s face it – we are stock investors. Even if we own gold and silver bullion – we also own stocks. There’s no getting around the fact that if you want commodity exposure, you pretty much have to look to stocks.

I’m not saying we should sell. What I’m saying is that we should be eyeing an exit strategy. When will we sell? If stocks fall 5%? 10%?

I don’t know – and I can’t answer these questions for you. It’s up to you to take a look at your individual stock holdings and to make a decision about how far you’re wiling to let them fall.

In other words, keep a trailing stop in mind.

I typically use a 30% stop – but use your own judgment.

Some stocks will get hit harder than others – small caps especially.

But the important thing is to set your stops now – mentally. Being mentally prepared now will help you avoid emotional decision making when this market starts to correct.

So when will that be?

I think we’ll see between a 5% and 10% correction between now and the first week of May.

I could be wrong, and if I am – keeping your mental stops handy won’t hurt you.