We might quietly
scoff at the Toyota (NYSE: TM) Prius drivers – after all,
the car only gets slightly better mileage than the average car in its class,
so it’s not all that special as far as environmentalism goes.

But don’t scoff too hard, because it just might be that
we’ll all be driving hybrid cars in the not-so distant future.

You might be thinking that we simply don’t have a model of
fuel-source change for automobiles – so we really don’t know what the future
will hold – and whether our cars will be powered by natural gas, lithium-ion,
or even solar power – or perhaps some combination.

But there is a very robust model for home heating
conversion.

Today there are at least as many heating technologies as
there are fuel types, but 100 years ago, most people used coal and
wood.

We certainly didn’t switch from all wood to all heating oil,
or all coal to all natural gas. I’m guessing that most people have “hybrid”
heating systems, in that they have heating oil or propane or coal
supplemented by firewood and electric space heaters; or solar, wind,
etc.

When I asked Tyler
Laundon, my colleague and coworker here at Wyatt
Research if he had a hybrid heating system – he said he
didn’t.

But then he thought about it. Tyler is in the process of
remodeling a mid-19th century farmhouse, and while he primarily
heats his house with a wood stove, he supplements the labor intensive
firewood with expensive heating oil to keep the Vermont winter chill out of
his ancient shack. Actually it’s ancient, but with amazing upgrades. His
newly installed radiant floor actually heats the entire house.

So he heats his house using a hybrid of two different
methods. To someone 100 or even 50 years ago, the idea of using more than one
heating source for a home might have been somewhat ridiculous.

You might think it equally ridiculous that a car would run
on two or three different fuel sources, but it’s already happening.

Granted, the hydrogen fuel cell does feed electricity to the
batteries and capacitors as well as power the bus, but the batteries can be
charged independently of the fuel cell. The capacitors actually charge
themselves as the bus accelerates and slows, so they’re recuperative – but an
automobile’s inertia is certainly a type of energy source that’s so far
largely untapped.

In the future, it might be that all cars have recuperative
capacitors reaping some of the inertial energy that’s otherwise lost when we
put the brakes on.

The new model Prius
also has a solar powered air conditioning unit – so it too is a
quadruply-powered automobile. It runs on gasoline, nickel-metal hydride
batteries, it has regenerative breaking AND it uses solar energy for its
AC.

Obviously, the Prius is an early example of the potential
for “hybrid” cars – and packaging so many technologies into one car is
somewhat prohibitively expensive. The Prius is in many ways identical to the
Corolla or the Matrix models, with the aforementioned added systems. Today
you can buy a Corolla for about $10,000 less than an otherwise identically
equipped Prius. The Matrix is about $9,000 less expensive.

That means that you’d have to go through about 85,000 miles
worth of driving, or 3,333 gallons of gasoline (at $3 a gallon), before the
Prius starts to get cheaper to drive than the Corolla.

My assumption is that the Prius and the Corolla would have
similar repair costs over those 85,000 miles – which they almost certainly
won’t.

But of course the hybrid technology will get better and
cheaper.

Another potential model for the “hybridization” of
automobiles might be that Americans have different cars powered by different
fuels. You might have your old gasoline powered car for longer trips, and
then you might have a liquid natural gas powered car for regular commutes,
and maybe a smaller nickel-metal hydride plug-in for quick trips to the
grocery store.

In any event, it’s pretty clear to me that Toyota is leading
the pack on this type of conversion. And the good news is Toyota’s stock is
about as cheap as it’s been all year.

It’s an even better bargain than it was back in February
when it was in the middle of dealing with negative consumer sentiment due to
its faulty brake issues. 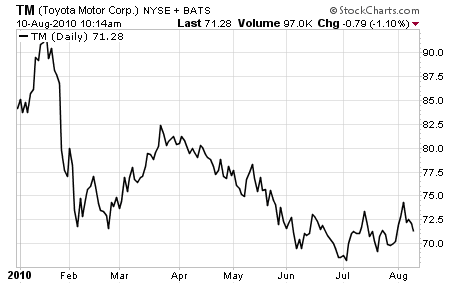 But it’s been in a sustained uptrend since its July lows,
and like it or not, Toyota is arguably the best car company on the
planet.

If you look at a stock search portal like yahoo! finance, you’ll see that Toyota
has a current PE valuation over 40. That’s pretty rich, but if Toyota’s
forward PE is to be trusted (a reasonable assumption given the accuracy of
analysts’ forecasts), it’ll be selling at less than 17 times earnings – a
much more reasonable valuation, even on a forward basis.

Whatever your personal bias on alternative fuels, the fact
remains that Toyota is going to be leader in whatever fuel technology we use
in our cars. It’s definitely a long-term play on the transportation fuels of
the future.

I’d look for an entry point under $75, and back up the truck
if the stock dips below $70 again.