We’re at an important crossroads for this bull market in
commodities.

Every bull market enters these crossroads, and even the most
fearless bulls are tempted to give up – to sell out of their
positions and consider themselves lucky that they were able to be
along for the ride – and to escape with any profits at all.

I’m going to post a chart that I’ve posted before to help remind you
of the real danger in "getting out" now. 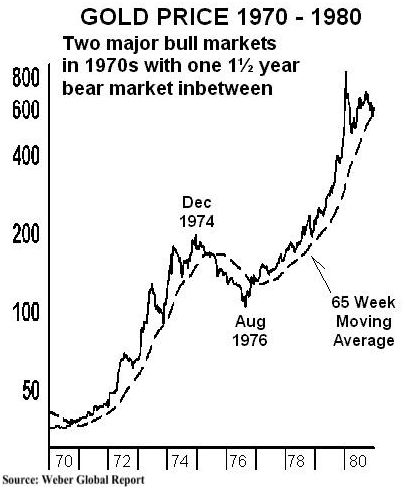 Right now, I believe we’re at a period not unlike early 1975.

Then, as it is now, the uptrend is still intact – and gold is still
above the 65 week moving average: 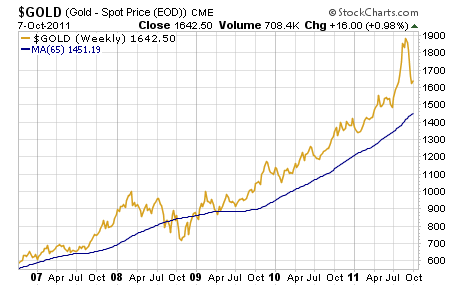 But if you were convinced to sell gold in 1975 as the 65 week moving
average was breached, you would have regretted it. You would have
missed the biggest part of the bull market in gold.

Typically, buying under that moving average will give you the best price you’ll get within a year.

So if you’re waiting for another time to buy – then your day might come.

But if you’re looking for the exits, then my personal belief is that you’re a bit premature – and that if you sell out of your gold (and silver) positions you will regret it.

Be patient. Be diligent – and have a plan for your investments.