Please ignore the headline that says stocks are rallying because Existing Home Sales came in stronger than expected. While that’s good news, it’s not a market mover. The US dollar remains the key driver for asset prices. And the dollar is weak today… 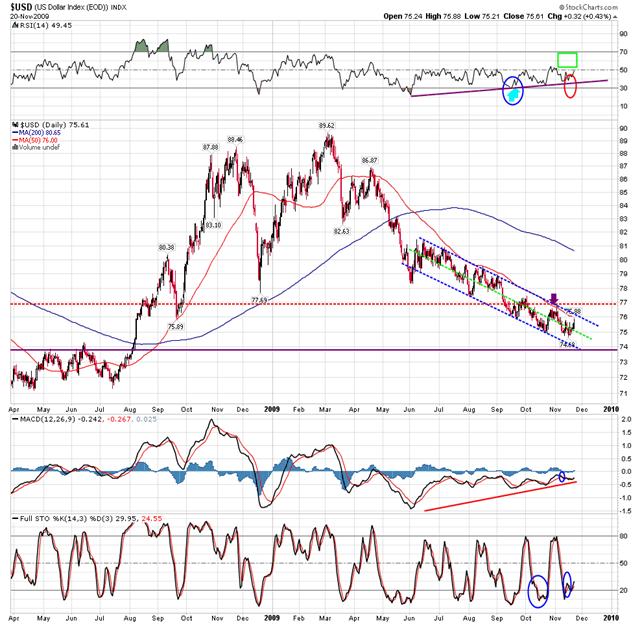 I’ve included the master US Dollar Index chart TradeMaster’s Jason Cimpl uses. He’s drawn a few extra lines on this chart to highlight the current trend channel, as well as support/resistance levels. The straight red line shows resistance at 77. And the straight purple line shows support at 74. Looking at the downward sloping trend channel, it appears that the US Dollar Index is headed to 74.
Today’s move below 75 on the US Dollar Index has pushed gold to another record high. The next leg down to 74 for the Dollar Index will push gold prices even higher.
But even more important than that – sustained strength for gold prices means that gold miners will be able to lock in even more future production at high prices. I am expecting tremendous profit growth from gold mining stocks for at least the next couple of quarters.
*****Interestingly, one of my favorite gold mining stocks, from the Top Stock Insights portfolio, recently had its 4th Quarter estimates raised by 26%. But none of the quarterly numbers for 2010 have been revised upward. I think there’s a big earnings surprise ahead for this company, and I’m expecting the shares to move a good deal higher from current levels around $11.50.
*****The U.K.’s opposition Conservative Party leader David Cameron has been railing against Prime Minister Brown’s stimulus policies. But Cameron saw his lead in popularity polls take a nosedive this week. Cameron has been pledging to freeze the pay of public service workers and make voters work and extra year before retiring.
If Cameron is surprised that these aren’t popular positions, well, I don’t know what to say.
The U.K. is grappling with many of the same issues as we are, here in the U.S. Its budget deficit is the highest since World War II. But there’s an underlying issue for England’s budget that no one is talking about: oil.
England takes in roughly 5-7% of its $2.65 trillion in GDP from oil revenue, mainly from North Sea reserves. That’s around $185 billion dollars. But North Sea production has peaked. In the last two years, England has gone from being a net oil exporter to a net oil importer. And since oil revenue supports a considerable portion of England’s social spending, the budget issues that Brown and Cameron are grappling with will be even more difficult to fix.
Cameron’s popularity has already taken a hit due to his proposed austerity measures. A permanent loss in oil revenue and the implications for social spending (cuts?) will certainly not be well-received.

*****The loss of oil revenue from falling production is an extremely important development, especially as governments around the world attempt to reflate their impaired economies. I’ll be keeping a close eye on countries like England and Mexico, where declining oil production is particularly noticeable.