Ian here. After the Internet bubble of the late
1990s and the real estate bubble that raged from 2000 to 2007, many
market observers are quick to call a bubble whenever a specific asset
class experiences a significant rise in price.

For investors already in gold, or those
considering adding exposure to gold, they must first answer the question,
“Is gold in a bubble?”

***To answer this question, let’s define what
creates a bubble. Simply put, bubbles are the result of too much
investment in a specific asset class. This occurs for a number of
reasons, including as a result of financial innovation, such as the
creation of sub-prime mortgages during the housing boom. It is also
fueled by investor exuberance, such as during the dot com boom when many
investors were beaming with joy over the ownership of money losing
Internet stocks. And it reaches its peak when speculators use large
amounts of leverage in an effort to maximize their gains, as we saw in
the real estate boom with zero money down loans and speculators flipping
properties for a quick buck.

Investors must look at gold through a similar
lens.

Is there currently a mania in gold, like there was
with Internet stocks or real estate? There is not. There are many
investors and commentators who are bearish on gold and believe the
asset’s rise can’t continue. Conversely, while there are certainly many
people who are bullish on gold, it’s far from a consensus opinion.

Is there investor exuberance? There is not. Gold
remains largely under-owned by investors as a whole. Many investors have
no ownership of gold through stocks, ETFs, or mutual funds. Those who
have some ownership typically hold a very small amount. How many people
have more than five-percent of their portfolio invested in gold? The
answer is very, very few.

***Eric Sprott of Sprott Money Management recently
published some great research that aims to show the low level of
investment in gold. In the Gold Yearbook 2010, the CPM Group
reported that in 1968, gold represented five percent of global financial
assets held by individuals for investment purposes. That percentage
steadily decreased from the late 1960s and bottomed in 2000. The decline
was largely caused by rising values of stock and bond markets around the
world, with the amount of gold held for investment purposes increasing at
much slower pace. 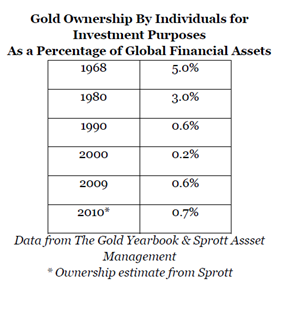 Only in recent years has there been a rise in gold
ownership for investment purposes. Sprott argues that a large increase in
recent years reflects the rise in the price of gold, rather than capital
inflows from investors who have been buying gold. In fact, he says that
of the increase from 0.2 percent in 2000 to 0.7 percent in 2010, only 0.1
percent of this increase, or the equivalent of $250 billion, was from new
investment.

When compared with the $98 trillion of new capital
invested in global financial markets during the same decade, the amount
invested in gold is comparatively trivial.

These numbers demonstrate that the average
individual investor has not participated in the bull market for gold.
While the media reports the latest moves in the daily price of gold, most
individuals have been sitting on the sidelines.

If this were a gold bubble, the average investor
would hold a healthy dose of gold through ETFs or even gold bullion. The
advent of the ETF makes it possible for investors to buy a stake in gold
just as easily as buying a stock through their online broker. Meanwhile,
the Internet has made it easy for individuals to buy gold bullion in the
form of coins or bars with relative ease.

In spite of how easy it is for individuals to invest in gold today, few
have done so.

***Another telltale sign of bubbles is rapid price
appreciation. While gold’s rise over the last decade is now approaching
five hundred percent, the rise has not been dramatic in short periods of
time. On the contrary, the rise in the price of gold has been slow and
steady, much like the rise of stocks from 1980 to 2000. 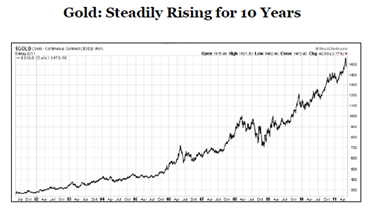