If you’ve been following the gold markets, you know that something strange has happened over the past year or so.

This large gain is not the strange part of the story. We know that gold is likely to rise in price in world currencies as long as central banks and world governments continue to print money in order to service decades of deficit spending.

Before I get into the strange part of the story – I’d like to briefly explain why gold is such a good measuring stick for currencies.

Also, unlike silver, copper, and many other precious and base metals, very little gold is consumed by industry. So almost every ounce that’s ever been mined is sitting in a vault, in a safety deposit box, in a jewelry box or otherwise in readily available form. 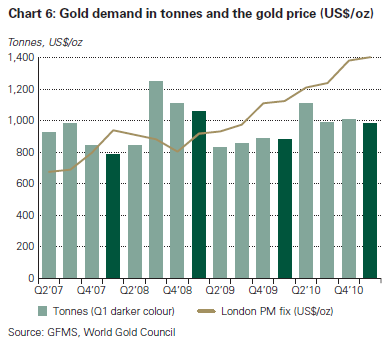 Demand stayed about the same regardless of whether gold was $700 an ounce or $1400 an ounce.

Every new $1 bill printed means that the world’s pile of gold has to necessarily be worth about $1 more.

You don’t have to take my word for it. We’ve seen the money supply vastly outpace the supply and production of gold. That’s why gold’s price is rising.

So here’s the strange part: while gold jumped 31.6% in the last year, gold stocks have lagged, big-time.

Here’s a chart of gold’s price over the past year plotted against a gold major ETF, the Market Vectors Gold Miners (NYSE: GDX): 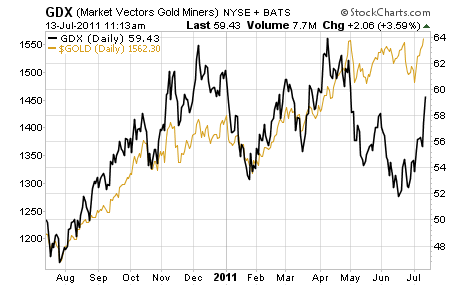 Normally, you might expect major gold producers to at least keep pace made in the price of gold. It’s not out of the question for gold majors to double or triple gains made in gold.

But right now, gold majors are lagging behind. And for no good reason.

Today, I think you could do much worse than to pick up shares of GDX. As long as this fund lags gold, you should be buying.

There have been very few times when this fund lags gold over the past 12 years, and all of them were great entry points.

Had you bought GDX at the end of 2000, when it was lagging gold you’d be sitting on 725% gains right now – nearly double the gains in gold alone.

Another great time to buy GDX was at the end of 2008, when it fell below gold’s performance for several months. GDX is up 240% since then, while gold is only up 110%.

If you buy today, I think you’ll come close to 2-3 times outperformance over gold in the next few years. That could mean a total gain of 500% or more, easily.

I hope you’ll take notice of this trend, and not wait until GDX and the gold majors to make huge moves.