I’ve long advocated that responsible
citizen-investors should eat their own cooking.  If you go to McDonalds (NYSE: MCD) three days a week, it only
makes sense to be a McDonalds shareholder.  If your lifestyle choices are
reflected in your portfolio, then you’re already in a good position to
understand the fundamentals of the companies you own.  Conversely, if
you’re buying companies that you don’t understand, then you’re setting yourself
up for failure.

And there are other benefits.  If you’re a
consumer of, say, crude oil, why not invest in companies that reap the reward
of your diligent consumption of gasoline, heating oil, and other petroleum
products?

According to AAA, the average car uses 533 gallons of gasoline
every year.  At $3 a gallon that means it costs about $1,600 a year to run
the average car for a year.

Before I answer that question, I’d like to revisit my
thesis for owning commodity stocks in general, as well as owning energy stocks
in specific.

My thesis: the stock market is in the middle, and
perhaps nearing the end, of a secular bear market. During bear markets, commodities typically
skyrocket in price.

I’ll use a chart of the S&P 500 index as proof that we’ve
been in a secular bear market for the past 12 years. This index tracks the 500 leading companies
in the U.S., and accounts
for 75% of all U.S.
traded equities. 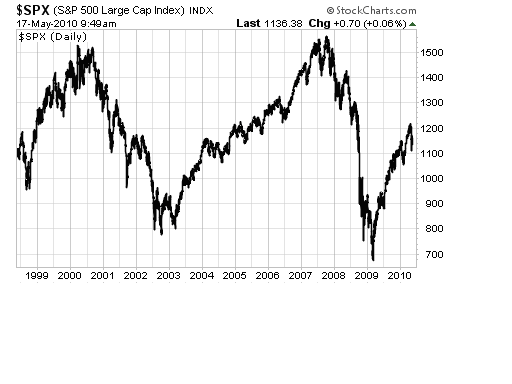 So, if you agree with my thesis that we’re in a bear
market for stocks, then you’d expect that commodity stocks would be in a long
term secular bull market.

And that’s born out with this chart of the AMEX oil
index (AMEX: XOI), which tracks the
13 largest oil companies. 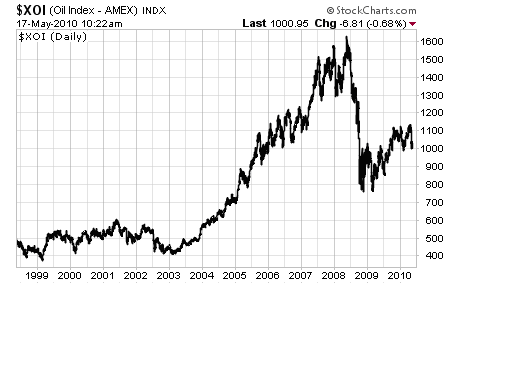 That’s about 8% annualized gains – which is better
than what you can ever expect from the broad market even in the best of
times.

And I don’t know about you, but it looks like the
broad market is still in the middle of a bearish funk. When that trend changes, and stocks are in a
sustained upswing selling at historically cheap valuations, only then will it
make sense to plow cash into a mutual fund or broad market index.

If you think we’re out of the woods, and that we can
expect the 5-8% annual gains from the broad market that we’ve been promised by
mutual fund managers and cheerleader pundits, please drop me a line at [email protected].

Back to my first point: how can you get oil companies
to pay for your gasoline?

In order to get to that $1,600 mark, you’d have to buy some
$22,000 worth of stock. That’s no small
potatoes for most investors, but think about it: buy those shares once, and
it’ll be like getting free gas for life. That is, as long as this company doesn’t cut its dividend. This company has paid a dividend for more
than 20 years in a row, and they’ve raised it almost every year since the
beginning of the bull market in commodities.

But they’re also one of the richest companies on the
planet, and regardless of what happens in the next couple years with the Gulf of Mexico oil spill, this company is going to be
around, and they’re going to continue to make huge profits selling oil to the
world.

If you still drive a car, you’re somewhat complicit
with the offshore oil disaster. That’s
not a popular sentiment – but it’s true! So I encourage you to eat your own cooking. Buy BP, collect the 7.2% dividend, and never
pay for another gallon of gas for as long as you live.

I promise, it’s not likely that you’ll be able to buy
a blue chip oil company for this cheap with a 7.2% dividend ever again.

As always, average in to any position, and use a
mental stop loss to mitigate risk in your portfolio.