I’m back in Vermont
after a week in Sea Isle City, New Jersey. And there’s nothing like a
vacation to make you appreciate the comforts of home. Even though Vermont
isn’t very far from New Jersey, geographically, the weather difference is
pretty dramatic. Vermont does get hot (we broke 100 degrees a few weeks back)
but I’ve never felt the urge to apply and reapply sunscreen here, like I did
in New Jersey last week. I still managed to get a sunburn.

And speaking of
sunburn, we’ve seen a doubling of wheat prices over the past month thanks to
fires in Russia, brought on by drought. Vladimir Putin just announced an
export ban on all wheat for 2010. 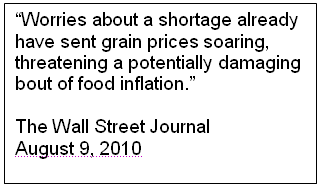 They’ve fallen over the past two trading sessions, but I
think we’re likely to see prices more akin to $13 a bushel (the highs of 36
months ago), then we are to see them at the recent 4 year lows of around $4 a
bushel.

We know that – as with all agriculture
commodities – wheat prices are something of a function of oil prices. That’s
borne out in the chart below, which shows a floor for wheat prices
at about that $4 range. (prices are quoted on
the right in cents per bushel). 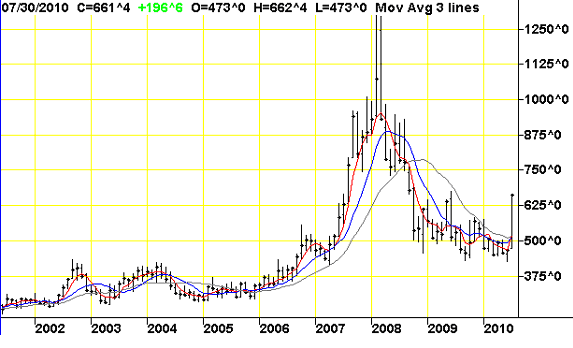 Average oil prices between wheat’s 2008
highs and today are at about $72 a barrel.

(You can see average annual oil prices going back to 1946

If $72 a barrel is the new average, then we can’t
realistically expect wheat to ever get back down below $3.50 a bushel as it
was throughout the early and mid 2000s.

Of course there’s no guarantee wheat will continue to rise,
either, but in this investment climate, finding assets that aren’t likely to
fall is a great way to preserve capital – which is the first rule of
successful investing.

So how can you invest in higher wheat prices? Though prices
are under pressure from Russia, and though China is the world’s largest
producer, the United States is still the biggest wheat exporter in the
world.

So you don’t have to look any further than Archer
Daniels Midland (NYSE: ADM) – the largest publicly traded grower of
wheat (and corn, soybeans, barley, etc.) in the United States.

I wrote about ADM last week too, in my issue about investing
in American obesity:

“This company produces corn along with dozens if not hundreds of
corn products including, but not
limited to corn syrup, starch,
glucose, dextrose, sweeteners, corn gluten, feed and meal, distiller’s
grains, corn germ, alcohol, amino acids and other food and animal feed
ingredients – and so on.

This company regularly redefines the American diet by
finding out new ways to consume ever-more amounts of corn. You might think
that our stomachs can only handle so much corn, but according to the USDA the
average American consumes 700 kg (1540 lbs) of corn every year.”

So buying ADM isn’t just a play on higher wheat prices, but
rather, a play on higher agriculture prices in general – and simply put, ADM
is the biggest and best agriculture company on the block. The stock is a
little more expensive than when I recommended it last week, but its trailing
PE is still pretty cheap at about 10 times earnings. At this point, however,
I’d wait for any dips to build a position. By this stock when it’s cheaper
than it was the day before, collect the 2% dividend, and wait for the
inevitability of higher oil prices to end up at the bottom line of higher
agriculture prices.

As of this writing, I have no position in ADM