I hesitate to mention this
‘commodity’, just because it’s not a commodity in
the strictest sense of the word. But in many ways, it is the most
influential commodity in the world. No, I’m not talking about
oil, or gold or even water.

This commodity trades hundreds
of billions of dollars in volume every day, and its price swings
effect everything from your heating bill to your food costs, gas,
gold, silver – everything.

This
über-commodity, ironically, has practically
limitless supply, and what’s more, the entire world reserves
are managed by a cartel of producers who can increase or decrease
supply at any moment.

Pretty sweet gig if you can
get it.

Right now, this commodity is
trading near its 4 year highs. The last time it was this expensive,
it dropped about 17% in 9 months.

Sometimes it’s easy to
get caught up in the particular supply/demand trends of whatever
commodity you’re interested in, and to ignore this
macro-macro force that frequently overwhelms even seasoned
investors.

What am I talking about?
It’s called the dollar. As the world’s reserve
currency, everything is priced in dollars, so dollar fluctuations
are an important function of any commodity play.

Here’s a chart showing
the dollar’s roller coaster ride over the past 4
years:

During those same periods,
gold skyrocketed as the dollar fell: 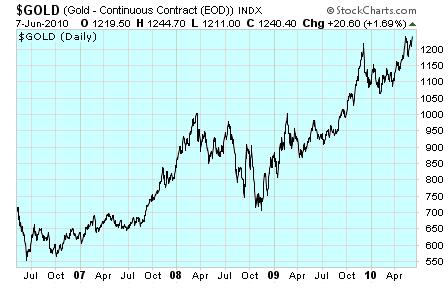 If gold gains
another 33%, it would be close to $1,650 an ounce. Eerily, gold
seems to be acting as a double inverse dollar play. Every
percentage decrease in the dollar index is reflected as a two-fold
increase in gold’s price. Pretty neat.

As I’ve said before, I
don’t like the idea of telling anyone to buy something when
it’s near its all time dollar-denominated highs. But when the
dollar appears to be due for a fall, and there’s no other
currency that’s showing any kind of strength, it’s
tough not to be bullish on gold.

While I’m on the topic
of making precarious remarks, I need to print a correction to my
statements in
yesterday’s issue of the Resource
Prospector, as well as an apology to my colleague
Jason Cimpl, editor of Trademaster Daily Stock
Alerts.

It’s almost splitting
hairs, but I somewhat mischaracterized Jason’s time horizon
for his bearishness on gold. To be clear, Jason is currently
‘long’ gold in his
Trademaster portfolio. If you’d
like to see how he’s playing the trend, you can click here to see what his
great trading alert service is all about.

My mistake was a matter of
terminology. For an active trader like Jason, his holding period
for any ‘long’ position might be a few weeks or a
couple months at the most. So he’s ‘long’ gold
– but not over the next 18 months.

As a long-term investor,
I’m not a big fan of transaction costs and short term capital
gains, so when I buy a position I like to be in it for the long
haul.

I’ll quote Jason from a
conversation we had yesterday, which seemed to clear up my
misunderstanding:

“Short term, gold is
influenced by velocity. Over long term it is impacted only by
[money] supply.”

So, apologies to Jason for my
mistake.

I don’t necessarily
agree with Jason’s assessment that gold will move lower over
the next 18 months. But if I’m wrong, and prices do fall, it
will be a great opportunity to buy more gold and gold stocks.
I’m not ‘long’ gold for 18 month gains. I’m
buying gold for long term inflation protection, and gold stocks for
long term capital gains. I won’t liquidate positions due to
short term price fluctuations – I’ll use those
fluctuations as opportunities to add to my position.

I found a great quote that
sums up why I’m long term bullish on gold:

“You have a choice between
the natural stability of gold and the honesty and intelligence of
the members of government. And with all due respect for those
gentlemen, I advise you, as long as the capitalist system lasts,
vote for gold.” – George Bernard Shaw

Gold,
and the companies that can successfully get it out of the ground,
are a long term play precisely because there is literally no
problem that world governments will not print money to
solve.

I’m careful to make
the distinction between gold companies, and gold companies that are
actually able to get gold out of the ground. Most junior gold
companies do not produce any gold. That’s why it’s
important to buy the best companies, with solid balance sheets that
have proved an ability to actually bring gold to
market.

Ian
Wyatt, my boss and Chief Investment Strategist here
at Wyatt
Investment Research, recently put together a
report all about a small North American gold miner that’s
currently selling for less than $4 a share. They’re already
producing gold. Last year they produced over 70,000 grams of gold,
and they have over 20 million proven ounces. At today’s
prices, that’s $25 billion worth of gold. But they’re
only a $200 million company – so as they continue to bring
that gold to market, I expect them to soar.

They
really are the best junior gold miner in the market
today.

Buying this
company today is the equivalent of buying their gold reserves for
$120 an ounce.

You
can read more about this company by
clicking here.