Quick – off the top of your head, name a non-commodity investment that has DOMINATED the S&P 500 over the past 12 years.

If you said 10-Year US Treasuries, congratulations – you’re right. Treasuries are up about 30% over the past 12 years, and stocks are flat: 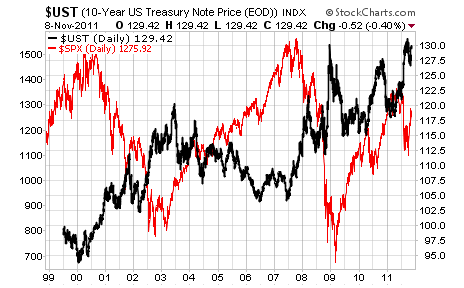 And this chart doesn’t include gains from the yield – which for much of the past 12 years was over 4% annually.

And it underscores the fact that we’re in a long term, secular bear market in stocks. Bonds and stocks, just like stocks and commodities, tend to be inversely correlated over long periods of time.

"Inverse correlation" just means that when stocks go down or sideways for a period of years, you’d expect commodities and bonds to rise – and vice versa.

And I know I’ve railed against Treasuries on many occasions. I’ve told you to sell Treasuries – or at least to avoid them – several times over the past two years.

To be more accurate, I’ve pointed out that it doesn’t make any sense to flee stocks in favor of Treasuries when you can buy gold and/or silver.

Because even though Treasuries trounced stocks since 1999 – gold and silver far outperformed Treasuries over that same time frame. 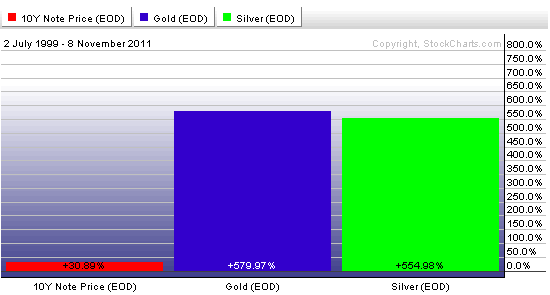 This chart tells you everything you need to know about the real outperformance of gold and silver – and to a lesser extent, commodities in general.

But it’s hard to simply dismiss Treasuries – especially since they are outperforming stocks.

So what’s going on here?

Well, Treasuries increase in price as the yield falls.

And since the 10 Year Treasury yield has done little BUT fall over the past 12 years, the price has necessarily risen. 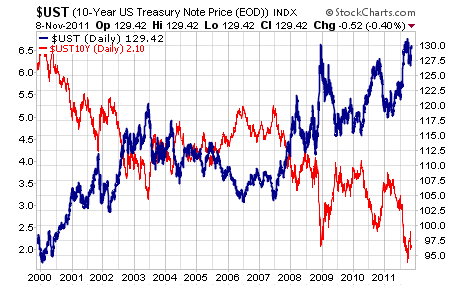 So, as a general rule, when you buy a Treasury, you WANT the yields to fall afterwards because that will boost the price.

And part of the reason I would hate to buy Treasuries right now is that the yields are at or near not just 10 year lows – but all time lows.

Now, we know that Ben Bernanke SAYS he’ll keep rates low for the next 2 years or so. But what happens if/when he changes his mind?

Unlike Treasuries, there’s no practical constraint for gold or silver prices. It’s nearly impossible for Treasury yields to go negative, or even below 1% on a 10-Year bond.

But gold can double or triple again in price. That wouldn’t be out of the realm of possibility.

As long as stocks are in a bear market, and sovereign debt issues reign, I think we’ll see outperformance of Treasuries – yes, but also we’ll see complete domination of commodities over every other asset class.