Before I tell you about the exciting stock story, I have to mention something unusual. As you know, I eat, sleep and breathe commodity investments.

And until recently, I mainly bought gold and silver, as well as regular old commodity stocks like Exxon-Mobil (NYSE: XOM) and Barrick Gold (NYSE: ABX).

But a few weeks ago my co-worker Andy convinced me to do something I’ve never done before.

He asked me to paper-trade with him, while he live traded a unique income investment.

Now I’m kicking myself, because Andy is up over $1,200 – but I’m sitting on paper profits.

So, this weekend, Andy agreed to show me and a few of my Resource Prospector subscribers how he invests for income. This time, I won’t be paper trading. If you’re interested, click here to get signed up for this exclusive event.

Okay – onto the stock I HOPE you bought.

I recently picked up the latest issue of Bloomberg Business Week, and found this interesting story.

It’s mostly about how the gun industry loves President Obama, because gun sales went through the roof since he was elected.

But at the top of the story is an amazing chart, comparing the share performance of American gun manufacturer, Sturm and Ruger (NYSE: RGR) to the performance of gold since January 2009: 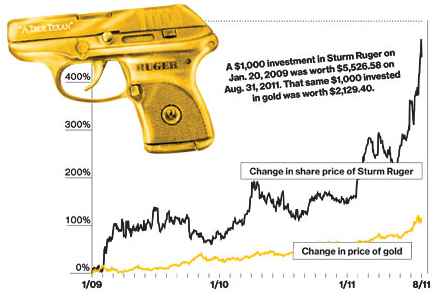 Now, I’m a little embarrassed, but I completely forgot that I recommended buying Sturm and Ruger last August.

For years, this gun was the staple service revolver for law enforcement. It’s been usurped by semi-automatic pistols like the Glock 9mm. In a pinch, you can use this gun to hunt with as well. Elmer Keith, an Idaho rancher, gun enthusiast and hunter claimed that this gun could take down any animal in North America.

Today, you can buy shares of Sturm and Ruger for just under nine times earnings. The company also pays a fair-sized dividend yield of 3%. The company has a 20 year history of paying dividends.

I’d suggest buying this company as long as it’s selling for under $14 a share. That lets you buy this company at less than 10-times earnings, which is statistically a very conservative buy-price for most sectors of the stock market."

Why is this company performing so well? As Business Week puts it, "Analysts anticipated a brief jump in firearm sales after the election as many gun owners, fearful that a new Democratic President would move to ban assault weapons, fortified their home arsenals. As a result, 2009 was `a blockbuster year.’ So was 2010. And so is 2011."

Now, I’d be remiss if I told you to pick up shares at this valuation. When I recommended Ruger, it sold for less than 10 times earnings. Now it sells for nearly 20 times earnings.

I like this company as a long term holding, but only if you can buy it at historically cheap levels – at least below 15 times earnings.

And normally, I’d recommend something like Smith and Wesson (NYSE: SWHC) – but something is terribly wrong with that stock – it’s been declining nearly every week since March of 2009. I’ll do some more digging and see if I can figure out why.

But if you’re looking for another great company, selling for less than 10 times earnings. I’d recommend picking up shares of Exxon-Mobil. You don’t get too many chances to buy this kind of strong company for this valuation. I don’t know if it will double over the next year, as Ruger did, but when you buy stocks this cheaply, good things tend to happen.