Coal is awful. When the black rock burns it pollutes,
spewing metric tons of carbon dioxide in the atmosphere every day. Most investors will tell you it’s a dead
resource: “we’re moving towards renewables,” they’ll say. Coal is an anachronism; a blight. It’s an atrociously dirty energy source that
will soon be relegated to the same place we put lead paint, asbestos insulation,
and shoe-store foot x-rays – buried deep down in the ground.

In the news this week alone,
there are two stories about coal miners trapped in mines – one coal mine in China, and one in West Virginia. There’s also a story about a coal tanker that
ran aground on Australia’s Great Barrier Reef. My point is that coal is largely hated.

Not by me, of course. I like having a warm house during cold
winters. I like air conditioning in the
summer. I like cheap goods produced so
cheaply, in part, thanks to inexpensive and plentiful coal. I also like the idea of buying stock in
companies that mine such a cheap, hated commodity.

Coal isn’t going anywhere. In fact, it’s on its way back to the top of
the resource pile. We’ll be using more
coal than ever in the coming years.

I’ve got the charts and
figures to prove it. Coal is going to
replace oil as our primary energy source. There’s not really a question of “if”, at this point. Even the question of “when” might already be
answered. The transition could possibly be
as soon as 2011, conservatively as late as 2016. That’s according to Gregor
Macdonald, Chief Energy Analyst of Energy World Profits.

There’s not an “international
primary energy indicator” that can tell us precisely when we get more of our energy
from coal than from oil – but take a look at this chart, it’s the closest thing
to such an indicator: 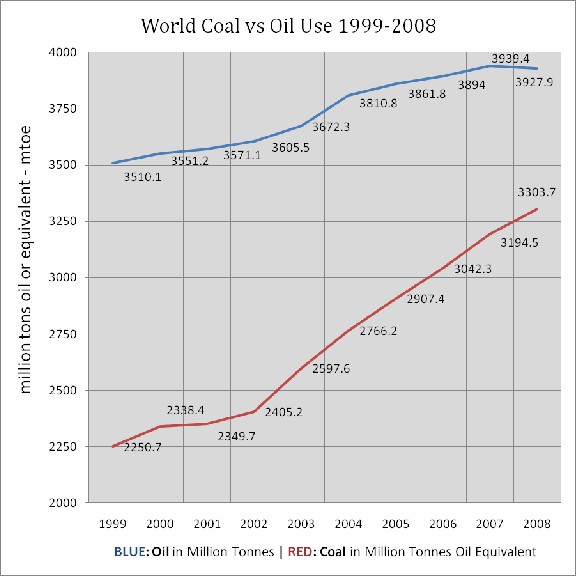 In the February, 2010 issue
of Energy
World Profits, Gregor put this chart together – along with this quote
about how fast world use of coal is growing:

“In
recent years, coal use has risen by 4.9% per year, faster than any other fuel.
The use of coal is expected to rise by over 60% from 2006 to 2030, with
developing countries responsible for 97% of this increase.” – World Coal Institute

Growth in coal use, like the
use of most commodities, shows itself most prevalently in China. To date, China already uses more coal than any
other nation. The US is #2 – but China
is still growing its use of coal, along with every other nation, including the US. Right now, we get close to half of our
electricity from coal power plants. There’s
nothing that can come close to matching that output in today’s marketplace. And
with oil supplies around the world dwindling it’s likely that coal’s
attractiveness as an energy source will only continue to increase.

As oil gets more expensive,
coal prices have stayed cheap just because it’s so plentiful. It doesn’t take an energy analyst to see how
the trend will eventually play out. But it doesn’t hurt that Gregor has been
able to compile the data to illustrate the argument. The price of coal will continue
to crawl precipitously upward.

I don’t
think most people are aware of coal’s attributes and how it will play an ever
more vital role supplying the world’s energy. I think right now most people pretty much despise coal.

To test this theory,
yesterday I sent some of the above statistics and facts about coal use to my younger,
environmentally conscious sister, and told her that maybe she should buy stock
in a few promising coal companies.

“Long story short: China
uses a lot of coal, as does the US.
Other nations are using more and more coal. Furthermore, we are running
out of cheap oil, but we still have a whole lot of cheap coal. So you should buy
shares in coal companies today, while they’re cheap. Hold them forever and
you’ll make money."

Her response: “I refuse to invest in something like that.”

The emphasis is mine, since
it was an email discussion, but I can imagine her face screwing up at the
thought of giving her money to evil, greedy coal companies that pollute and
destroy our delicate earth.

This immediate knee-jerk
distaste for coal, I think, is something that many investors share with my
sister. Sure, they’ll heat their homes
with coal. They’ll buy goods from China made
possible by coal. They’ll even leave
their lights on when they on vacation thanks to cheap electricity from cheap
coal – but they shudder to think about investing in coal companies.

I believe this
type of sentiment makes for a once-in-a-lifetime investment opportunity. What’s more hated than coal? Sentiment can only reverse. When sentiment catches up with the reality –
that we’ll be using more and more coal every year for the next 20+ years at
least – early coal investors will make a true bundle.

So there’s only one question
you have to ask yourself: are you an early investor, or, like my sister, do you
“refuse to invest in something like that?”

I for one want my money to
be in front of huge trends exactly like this one. Coal use is going to grow regardless of
whether I invest in it or not. I know
that today’s plants are generally much cleaner, and more efficient than old
plants – so if anything, my tiny contribution only makes it easier for
companies to build new plants. President Obama is behind clean coal technology.
Major manufacturers are designing scrubbers to clean smokestacks and decrease
toxins before they are released into the atmosphere. And the economies of many
states like Pennsylvania
have a huge economic interest in the future of clean coal as a major part of
our energy mix.

If you don’t like coal,
that’s fine. Sit this one out. But I
think it could be one of the best commodity/energy investments of the next 20
years – so I encourage you to consider it further.

To help you make an informed
decision, we have a Special Report all about energy investing, including
coal. Click here to start a risk-free 90-day
trial and read this Special Report at your leisure.

We have also recently added
a stellar coal company to our Energy World Profits portfolio.

Right now, this company is up over 100% for the year.  But I still think it’s a
bargain in the coal industry. The
company has also tapped into China’s
growth. This stock could be an easy
double in the coming months. It could
be the best way to buy a double-upside in coal prices AND growth in China. Click here to get the full story.