I apologize for not writing about oil more often – even though it’s arguably the single most important commodity on the planet.

And right now, you might be sick of hearing about cheap oil prices. They’re all over the headlines. And these low oil prices are touted as the good news in the markets these days.

They signal slowing growth or even shrinkage.

So at best, lower oil prices is a silver lining on a great big dark cloud. It reminds me of one of my favorite morbid proverbs: If you give a man a match, he’ll be warm for a few moments. But if you set a man on fire, he’ll be warm for the rest of his life.

Moreover, low oil prices don’t even mean low gasoline prices – as you may have noticed lately. 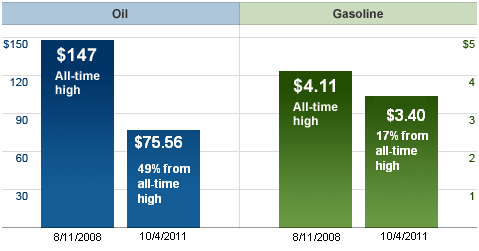 West Texas Intermediate Crude (WTIC) prices (the American benchmark) are almost half as high as they were back in the summer of 2008.

But the average gallon of regular gasoline costs just 17% less than a gallon of gas cost during that period.

And you might be tempted to simply blame speculators, or to believe that gas vendors are colluding to gouge us.

But it’s just not the case. Speculators and gougers have little if anything to do with the price at the pump.

Right now, there’s a big disparity between the cost of oil and the cost of gasoline for a very simple and non-fraudulent reason.

In most basic terms: there’s a disparity because the oil market and gasoline market are separate (though interrelated) markets.

For a more in-depth explanation: oil prices are cheap because of a glut of oil from tar sands, oil sands and increasing supply coming in through Canada, oil exporting States and even the Gulf of Mexico.

All of that oil goes through Cushing, Oklahoma – which is where we get the WTIC price.

So there’s lots of oil sitting there, not enough refinery inventory to process it into gasoline, and not even enough pipeline to get it to the refineries quickly enough to get rid of the glut.

Think of it as a warehouse of corn. Trucks come in every day and haul off a portion of it, but there’s always more corn waiting in other trucks to bring the warehouse back to full capacity. If you’re the owner of that warehouse, you’re not going to pay top dollar for each batch of corn – no matter what price your end consumer will pay for corn chips and other finished corn products.

And while all of that oil is cheap, the end product (gasoline) hasn’t come down much because there’s still healthy demand for gasoline at $3.40 a gallon, and not enough refinery space to fill that demand and lower prices.

The obvious investment implication is to look for companies that refine oil. Valero Energy Corp. (NYSE: VLO) fits the bill.

The problem is, these refiners are still underperforming. 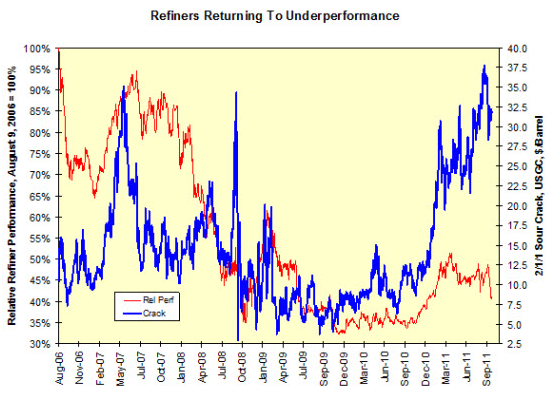 So if you do buy Valero today, you’re not buying something that’s in a strong uptrend. Since around April of 2011, refiners in general have been in a down trend.

And Valero is no exception.

I don’t know about you, but I don’t like to buy individual stocks when they’re getting crushed like Valero is right now.

But soon – and it could be next week – Valero will enter an uptrend. And I believe they’re in a great position to begin to outperform over the long term.

Keep an eye on Valero, and wait for the uptrend.