That’s the headline from a story in
The Wall Street Journal just a few days ago, on September
10, 2010.

That’s still close to the dollar denominated high of $1265
reached in June.

I just bought some physical gold during the dip back in
July, and I do plan on buying during future dips – but I wouldn’t recommend
buying gold necessarily at this point.

Even though the
yellow metal is about $1000 off its inflation-adjusted highs of $2251 reached
in 1980, I hesitate to recommend buying physical gold at these levels.

The good news is that there are plenty of gold securities
you can buy that are still relatively inexpensive. That’s because gold stocks
tend to lag gains made in the price of the underlying commodity. 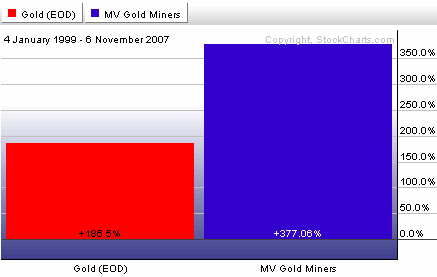 You can see how the bull market in gold over this period was
magnified nearly two-fold in gold stocks.

But since September
of 2007 gold stocks have been lagging gains made in the price of gold. 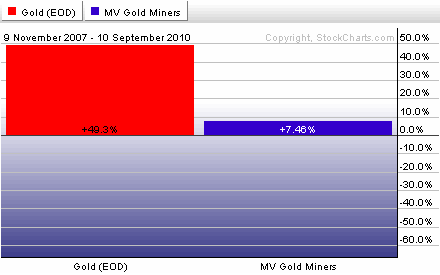 You can account for some of the under-performance by looking
at the huge sell-off in all stocks in 2008-2009. Since then, gold has nearly
doubled, while gold stocks are flat: 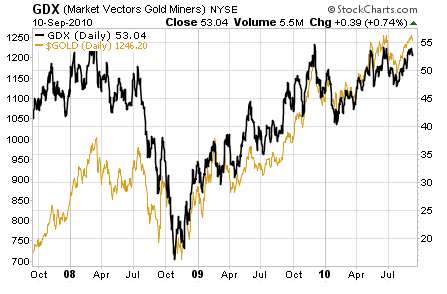 But $1200+ gold is hugely profitable for gold mining
companies. Most gold miners are profitable as long as gold is north of around
$600. That’s about the average amount of money it takes to mine and refine
one ounce of gold and bring it to market.

Anything over $600 is pure profit. That’s why gold miners
are able to multiply gains made in gold: their earnings go up by an
incremental factor over and above their costs of production.

The lag can be accounted for because of two reasons: it
takes time for gold miners to increase production to take advantage of
increasing prices, and most fundamental analysts (the guys who set price
targets on Wall Street) determine a stock’s price target based on the present
value of future cash flows – the stocks will move higher once these
increasing future cash flows become more reliable.

So, the trick is to find companies with the lowest
costs-per-ounce, and to buy them on dips after gold falls.

If you’re interested in an investment with a little more
upside, then I’d recommend taking a look at a company Chief Investment
Strategist Ian Wyatt recently added to his Small Cap Investor
Pro portfolio. It’s a small North American gold mining company
with one of the lowest costs-per-ounce of any gold miner: around $450.

But right now this company is trading at a substantial
discount to its gold reserves. Buying them today is like buying their gold in
the ground for less than $200 an ounce. Like most publicly traded gold
companies, they’re lagging gains made in gold’s price. Gold made 15% gains so
far this year, but Ian’s favorite gold stock is actually down 5%.

It’s a great time to be buying low cost gold producers.
You
can click here to read the rest of the story.