Goldman Sachs (NYSE: GS) is the preeminent investment banking firm in the world, built on the strength of its uncanny knack for correctly predicting which way the stock market winds are blowing.

But when it comes to gold, Goldman Sachs is often dead wrong.

So there’s no need to panic when the so-called “Vampire Squid” says that gold prices will peak in 2013. That’s what Goldman analyst Damien Courvalin is calling for in a recent report on gold.

Courvalin predicts that gold, currently trading at just over $1,700 an ounce, will top out in three months before pulling back considerably in late 2013 and 2014.

As a commodity investor, Goldman’s bearish gold outlook may be enough to convince you to sell off all your gold in three months. But recent history tells us it’s best to ignore any gold forecast Goldman Sachs issues.

Just look at this timeline of Goldman Sachs’ wishy-washy gold forecasts over the past two-plus years:

Now, it appears, Goldman is back to being bearish on gold. So, if you’re scoring at home, Goldman has gone from bullish to bearish to bullish and now back to bearish – all in the span of just two years.

If you’re a visual person like me, this chart of Goldman’s recent gold forecasts may paint a clearer picture: 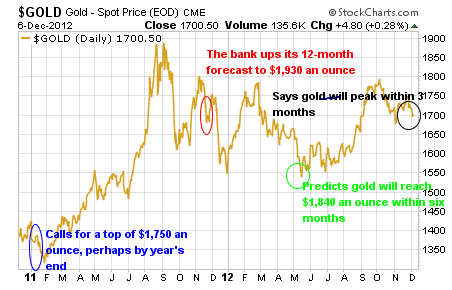 In summary: when Goldman predicted a top in gold of $1,750 an ounce, it went to almost $1,900 within nine months. Since Goldman changed its tune a year later and upped its 12-month forecast to $1,930 an ounce, gold prices have basically been flat.

So take Goldman’s gold predictions with a grain of salt. Any time you doubt yourself about gold’s long-term direction, just pull up this 10-year chart:

That should tell you all you need to know about where gold is likely headed.

Disclosure: I have no positions in Goldman Sachs.