I appear to have touched a nerve with some readers in my criticism of President Obama tapping the Strategic Petroleum Reserve in Friday’s letter.

For a small taste, here’s what reader John H. wrote in to say:

"Kevin McElroy’s last Resource Prospector email rather much annoyed me. (A huge understatement to say the least). Sure there are radical right wingers, tea party lovers and yes lots of bigots who can’t stand the idea of a black president that will take any opportunity to criticize our president, but I have found Ian Watt to be a bit more open minded than those lots. I am surprised he endorsed your tirade."

In Ian’s defense, he does not vet anything that I write. He has neither the time
nor the inclination to micro-manage everything that his analysts and writers
publish. And he trusts us implicitly to publish the best ideas and research that
we can unearth.

He and I would not have it any other way.

I stand by my critique of President Obama, and I’m sure Ian would have no objections. But I will not abide the implication that I’m a radical right-winger, a tea party member or a bigot simply because I have criticized our President. Dragging race into this argument is just completely unnecessary, and even worse, I think it distracts from the real point of my argument.

My point is that tapping the SPR is a mistake and that doing so for this non-emergency will likely result in unintended consequences that will be worse than the problem it’s intended to fix.

I also had some readers chime in and tell me that the President had to tap the SPR in order to stymie the efforts of oil speculators.

And to reiterate, I believe that this excuse – which I don’t even think is the crux of the official line of reasoning – does not make much sense.

I constantly hear people blaming speculators for the record high oil prices of 2008.

Everyone pounds the table about $147 barrel oil.

I agree that $147 oil is not possible without market speculators. But it’s not a useful data point to draw any conclusions from.

When you look at oil price data points, it’s not very informative to look at year-over-year highs or lows. You correctly point out that oil crashed from $147 down to $35 a barrel. And that kind of price movement is dramatic, but it’s also the result of some very unique factors – speculation being among the least important.

Instead of focusing on the $147 and the $35, think about the average price on an annual basis. You can see
data going back to 1946 here.

Here’s a table showing the average price of oil from 2005 to today. 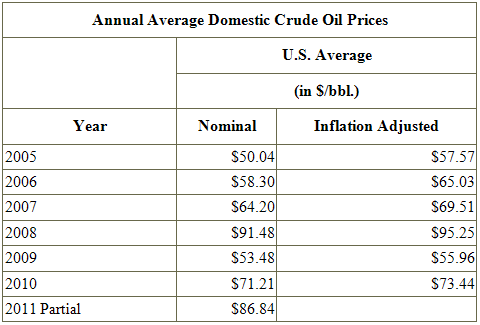 That gives you a much more useful metric to see where oil prices are moving – because in reality, oil only traded for $147 for a few minutes during the summer of 2008. You probably didn’t buy much $147 oil, if any. Then, oil prices dropped to $35 a barrel for a few more minutes in 2009. And you probably didn’t buy any oil then, either. So, those extreme price swings, while useful for politicians and newsletter writers to point at to sell their book, they’re simply not very informative.
Some other folks wrote in to tell me that Obama HAD to tap the SPR in order to help sustain the recovery and that doing so is not additive to our fiscal and monetary problems.

Here’s why I disagree with that assertion:

Obama says he will be slowly replacing the 30 million barrels, the obvious problem is that the oil he’s releasing from the SPR was purchased at much, much lower prices then he’ll inevitably have to pay to replenish the reserve.

So, it IS a question of more spending. And the effect of slightly lowering prices in the short term will be more than counterbalanced by the fact that any oil we buy in the future will be MORE expensive.

And it will be more expensive – not just because of speculators. Speculators have been around for years, and they’ll continue to be around for decades.

But the reason oil is getting more expensive is three-fold. And unfortunately, there’s nothing Obama can do about parts one and two. As for part three…

1. We’re running out of oil. Don’t take my word for it. The International Energy
agency – the largest non-governmental energy think tank finally
published their findings last year that peak oil, does indeed exist. And
while the IEA predicts we won’t hit peak oil production until 2035, they also
have a very Pollyanna view of new oil production that will supposedly come in
and save the day. Note their "New Policies Scenario" which predicts we’ll
somehow find and develop 60 million barrels per day of new oil over the next 25
years. 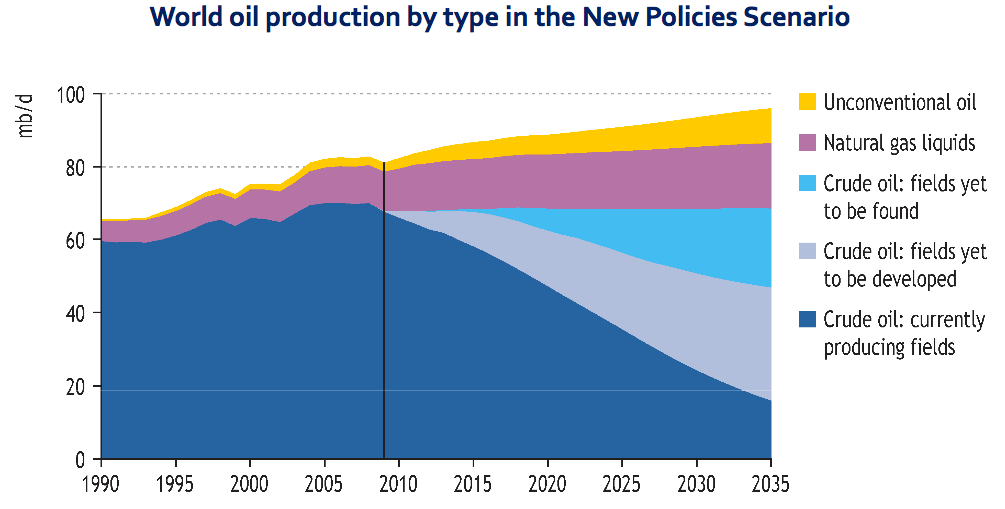 2. China, India and a host of other growing economies are using more oil every
year. I don’t even have to post a chart to show prove this point. The growth in
those countries clearly increases demand for oil.

3. Dollar devaluation. Every barrel of crude gets paid for in dollars. That’s
the deal we have with the oil markets. We give them dollars, they give us oil.
And while the oil markets as a whole are big, dumb and slow moving, they’re not
so dumb as to take a wasting asset like the dollar in perpetuity. As we’re
seeing, oil producers are inclined to want more dollars for their oil. And as we
WILL probably see, oil producers may not be inclined to settle oil contracts in
dollars forever.

Obama has some control over number 3. But as I write on a nearly weekly basis, he, along with almost every other politician in this country has neither the willingness nor the ability to take the steps necessary to save the dollar.

Again, thanks to everyone for writing in – even with the accusations of bigotry and the swearing – I do enjoy reading your letters.

So if you want to set me straight, drop me a line at [email protected].