Today I’d like to show you a chart which should explain everything you need to know about inflation, commodities and why prices for just about everything are rising today and are likely to rise still further tomorrow. 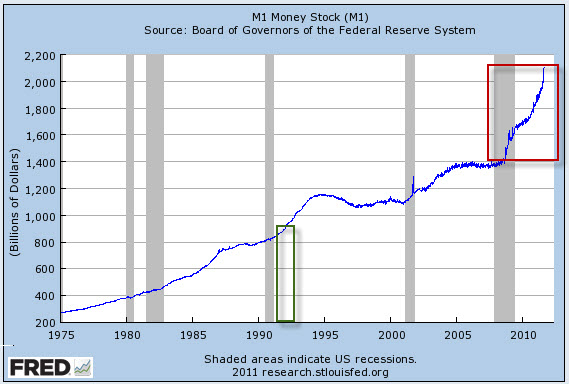 This chart comes to us from Dr. Chris Martenson, a well-respected financial blogger.

Dr. Martenson points out an interesting tidbit about our current M1 money supply:

"The increase in M1 since the start of the financial crisis (red box) is the same as the entire accumulated supply of money that existed in 1992 (green box). That is, as much M1 money has been created in the past three years as was created from the founding of this country through 1992."

For a re-cap of M1 – it’s the narrowest measure of money supply. It tells us how much money is sloshing around in cash as well as demand accounts – your checking and savings accounts.

So we’ve essentially tripled M1 over the past 17 years, with much of that tripling having taken place in the last 3 years.

Now I don’t think anyone reading these words would come to the conclusion that we’re twice as rich as we were just 7 years ago when M1 was sitting at about half of where it does today.

Normally when you have more money, it’s a good thing.

But we’ve increased our money supply artificially. So we haven’t changed our overall worth. We’ve just sliced that worth into twice as many units. Unfortunately, most of us don’t have twice as many units. We have about the same amount. The bulk of those units have been transferred to a variety of corporate interests, mainly in the banking sector.

Moreover… many of them aren’t even in the United States!

An August 22nd article from Bloomberg, titled Wall Street Aristocracy Got $1.2 trillion in Fed’s Secret Loans, tells us about just one more of the many boondoggles that have added to our money supply to the detriment of you and me.

The Fed has basically robbed everyone of a huge sum of their accumulated dollar-denominated wealth – and given it to the richest and best connected banking institutions in the world.

If Ben Bernanke broke into your house and started loading your possessions into a Bank of America van, in most states you’d be completely within legal statutes to shoot him down in defense of yourself and your property.

But because he’s been given tacit Congressional approval to raid your net worth, it’s against the law.

And while I can not condone anyone shooting Ben Bernanke, I think he should leave the Fed. He should resign effective immediately. He should take the blame for causing the price of nearly everything to rise.

He should fess up and tell the world that Lord Keynes is dead and so are his theories. He should turn his life around and apologize profusely for the damage he’s caused. He should advocate for strong, honest and strict money policies that reward savers, punish debtors and make it a felony punishable by life in prison to debase the currency of the United States.

Of course he won’t do any of these things. And so we should expect still greater things for commodities, and still worse things for folks who own the U.S. Federal Reserve Note.

Here’s to self defense.