I hate to pick on Jim
Cramer. He seems like a nice guy, and
his show is nothing if not entertaining. After all, he literally has bells and whistles on his show, so there’s
little argument that he’s an entertainer.

But
yesterday, Mr. Cramer did something that bothers me deep down in the most
contrarian cockles of my heart: he told
his viewers to buy gold. Even worse,
he parroted some half-assed gold-bug tenets as reasons to buy gold right now.

Why am I so uncomfortable
seeing Mr. Cramer pound his noise-buttons for gold? Well, the best reason to ignore him is the
one I’ve already mentioned. Jim Cramer
is an entertainer. I don’t get
investment advice from Jay Leno, so why would I get it from Cramer?

The second reason, as I’m
sure you’re familiar with, is that Cramer isn’t especially good at picking
individual investments on his TV show. I
know he’s worked for hedge funds and he’s a big “Street” hotshot, but as far as
I can tell, he’s wrong at least as often as he’s right.

According to a 2009 article
from Barron’s,

Cramer’s recommendations underperform the market by
most measures. From May to December of last year, for example, the market lost
about 30%. Heeding Cramer’s Buys and Sells would have added another five
percentage points to that loss, according to our latest tally.”

A Google search reveals just
as many strategies that suggest shorting Cramer’s picks as buying them.

The third
reason I feel uncomfortable about his recommendation is that he gives some
questionable reasons for buying gold. Specifically, he gives us 6 reasons, none of which make total
sense. I won’t list them all here, but I
will poke holes in just one of them…

His number one reason to buy
gold today is that it’s dependable. His
proof? He thinks gold will go to $2,000
an ounce. That’s circular logic at
best. It’s also dependable because it
“tends to rise when other currencies fall.”

That’s exactly the kind of
misstatement that irks me. Gold doesn’t
rise when other currencies fall. Gold
isn’t a double inverse currency trade. It’s a store of value. It stays
roughly the same. If you’re hoping to
make “profits” by owning gold, then you are buying for the wrong reasons. And when large swaths of people buy something
for the wrong reasons, it creates an unsustainable trend. You wouldn’t buy any other money or currency
with the hopes to make profits. You hope
that money keeps its value.

You can read the rest of
Cramer’s “reasons” by clicking
here, though I wouldn’t advise it.

So when someone like Jim
Cramer starts yelling at me to buy gold, it gives me pause.

Is he wrong to tell his
viewers to buy gold? Not necessarily. I’m still long-term bullish on gold as a way
to protect wealth against inflationary policies of the world’s central bankers
and spendthrift politicians.

But his timing couldn’t be
much worse. Gold is trading near its all
time highs. I don’t watch his show, but
I’m wondering if he has a tendency just to tell people to buy investments when
they’re at their highest, simply because he knows people are probably already
excited about the idea.

He also recommends buying
the gold ETF (NYSE: GLD) – which is another classic blunder. I’ve given my reasons against owning this ETF
before, and they’re still the same. Buying the ETF gives you neither the security of owning the physical
metal, nor the upside potential of owning a gold stock. The only benefit to owning GLD over the metal,
or individual stocks, is that it’s more convenient than physical gold, and not
as volatile as stocks.

I’ve been
an advocate of buying gold and gold securities during their dips. And I’m crystal clear about my reasons for
owning both. As I just noted, gold
protects wealth. It’s an insurance policy
against currency devaluation. Gold
stocks offer the potential to multiply gains made in gold. If you believe in the trend then you’re
advised to own both. 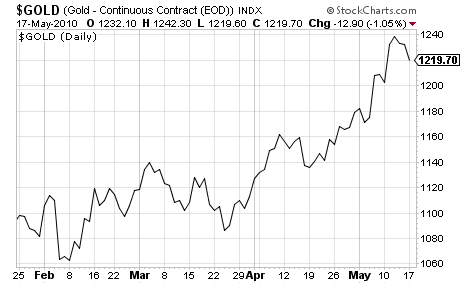 I’d look for any further
downside in gold as a time to add to positions in the physical metal and/or
gold stocks.

If you’re interested in
finding out the name of my favorite gold stock right now, you can click
here to read a full report. The
company is in the junior mining sector, is located in North America, and buying
this stock today is like buying gold for $120 an ounce.

If you have any questions,
comments or you want to defend Jim Cramer, send me a message at [email protected]