In 2011, for the first time ever, more corn was made into ethanol than consumed as food (for humans) or feed (for animals) in the United States.

It’s amazing – and startling – because everyone already knows that ethanol is a total rip-off. That’s despite the fact that the $6 billion a year ethanol subsidy expired late last year.

Ethanol use EXPLODED between 2000 and 2010 as this huge subsidy helped introduce ethanol into nearly every gas station in the United States.

By one measure, America’s automobiles consume 1/6 of the world’s corn every year. That’s disgusting in a world where people do starve to death. Throw on top of that fact that ethanol actually isn’t any cheaper, cleaner or economically efficient than gasoline, and it’s downright stupid. 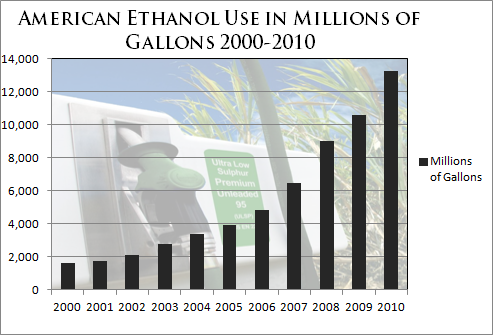 Though the subsidy lapsed last year, it’s not likely to substantially affect the amount of ethanol consumed in the United States in 2012.

The benefactor – if it’s not obvious – is anyone growing or selling corn.

Look at the price of corn over the past 10 years – as the amount of ethanol consumption tripled and quadrupled: 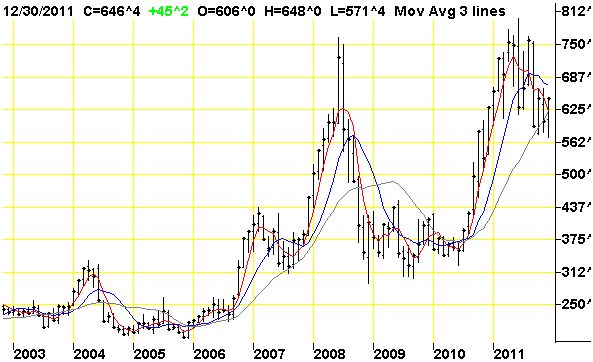 Prices are quoted in cents per bushel.

So the price we all pay for corn flakes and corn on the cob now depends more on how much we drive than how much we eat.

It’s another reminder that we’re not just through the rabbit hole of corporate welfare and government intervention – we’re having tea with the March Hare.

As the White Queen explains, sometimes we’re punished before we commit a crime. Today, we’re being punished by leadership in DC for not growing corn. Or for driving cars that consume gasoline. Who knows.

The investment implications are frightening if not confusing. Should we buy a company like Monsanto (NYSE: MON)?

I’d be leery at this point. Besides the fact that the end of the ethanol subsidy may hurt Monsanto’s bottom line, the company currently trades at a pretty rich valuation of over 20 times earnings.

I like Monsanto as a long term holding, but not at this price.

The end of corn ethanol is not likely to come any time soon. But it’s a stupid and actually injurious policy. So it will end. The halting of ethanol subsidies was just the start.

I’d look for corn prices to revert to trading more along the lines of gasoline prices. The slow death of ethanol will take a little bit of air out of corn prices, but not much.

Be cautious in agriculture right now. If you’re interested in a safer way to play trends in agriculture, take a look at the IQ Global Business Small Cap ETF (NYSE: CROP).

It tracks a basket of smaller food and crop producers diversified across the globe. It sells for an average of just 10 times trailing earnings. And if the commodity supercycle continues, these stable companies should hold their own.