Last year at this time, I recommended one specific
oil investment to buy in order to take advantage of rising oil
prices.

Before I review this investment, I’d like to discuss why this time of year
might be the best time to add to or build a position in oil
investments.


As I noted this time last year, the third quarter (starting in July and
ending in September) tends to exhibit the largest oil price increases for
the entire year. This price action happens almost entirely because of
seasonality in oil consumption.

Simply put: people drive more and so consume more oil in the 3rd quarter
than at any other time of the year. The chart below shows the average oil
price movement between 1978 and 2007 – so it excludes the highs of 2008 and
the lows of 2009.

As you might remember, those two years would only exaggerate this trend
further – so I’m certainly not cherry picking. 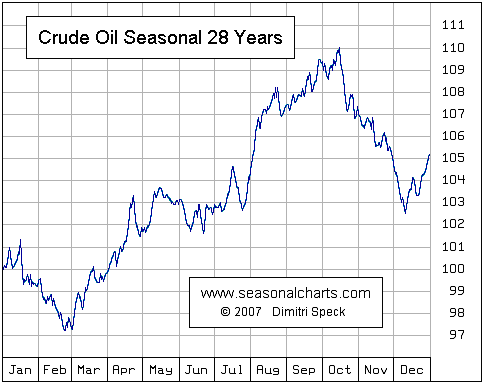 Now, besides the driving seasonality, there’s also some investment
seasonality. Call it the sell in May phenomena. Even oil speculators like
to take it easy during the summer months. So we have the wind at our backs
if we’re buying investments with upside to higher priced oil in early
July.

As I said last year, past performance is no guarantee of future results.
But that doesn’t mean we should ignore the trend, and it certainly doesn’t
mean we should try to buck it.

Last year, I recommended picking up shares of one oil services company.
Specialized companies in the oil services sector have huge upside to higher
priced oil for the simple reason that when oil prices rise, some of these
companies become much more in demand and therefore much more
profitable.

For instance, at $85 oil, deep sea drilling might be a break even business
operation. Every $1 increase in the price of oil above $85 means that deep
sea driller service companies are that much more profitable to
employ.

That’s why last year at this time I recommended picking up shares of a deep
sea driller: Noble Energy (NYSE: NE).

At the time, Noble had a trailing price-to-earnings ratio of just over
5.

That’s crazy-cheap for any company in any sector. And had you picked up
shares when I recommended Noble, you’d be sitting on 21% gains. 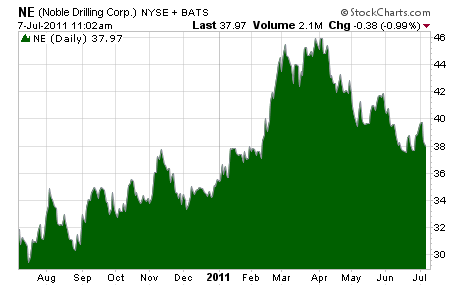 Today, Noble sells for over 20 times trailing earnings. It’s no longer
cheap, and the anti-driller sentiment from last year’s Gulf oil spill is
completely out of the picture.

I wouldn’t sell Noble – but I wouldn’t be adding to my position at these
oil prices.

If you’re interested in buying a cheap oil company today on an earnings
basis, take a look at the giant oil company Conoco-Philips (NYSE:
COP).

It sells for less than 10 times trailing earnings and it pays a current
dividend yield of 3.5%. That’s better than a 10 year US Treasury.

Anytime you can buy a blue-chip oil company for less than 10 times earnings
– and collect a yield better than a 10 year treasury, you should definitely
take a closer look.

If you didn’t take my advice last year and pick up shares of Noble, I hope
you’ll do some digging into Conoco-Philips this year and consider buying
some shares soon.