There
are always at least two sides to every commodity story, the biggest being supply
and demand.

In
yesterday’s
issue of the Resource Prospector, I talked about demand for
uranium. After following and untangling
the threads, it seems like demand is slated to rise. That’s according to two of the biggest
authorities on the subject, the World Nuclear Association, and the Nuclear
Energy Agency.
Today,
I’ll tackle the supply side of the equation – and I’ll show how current annual
production of uranium falls well short of annual consumption.

I
unearthed a WNA chart to better show this contrast, which I believe will be the
real catalyst for higher uranium prices. 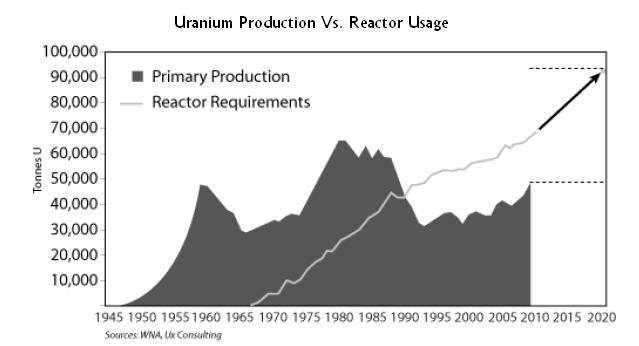 Okay,
so looking at this chart, there’s already a huge gap between production and
consumption.

Today, former bomb material from
Russia accounts for 45 percent of the fuel in American nuclear reactors, while
another 5 percent comes from American bombs, according to the Nuclear Energy
Institute, an industry trade association in .”

That’s
a situation that can’t last forever. The
program to dismantle bombs for nuclear fuel (called Megatons for Megawatts) has
so far claimed to have produced 11,047 tonnes of
uranium – or about 25% of the supply needed for one year. But even if demand stays the same, there is a
very finite amount of de-weaponized uranium left in government stockpiles. How much exactly, we can’t be sure. Government officials are understandably
tight-lipped about uranium stockpiles.

President
Obama is hosting a summit right now with world leaders on the topic of nuclear
disarmament. But, there are no definite
plans that either or
the
will produce more fuel from weapons.

In
fact, the program to dismantle bombs to make nuclear fuel is set to expire in
2013. But nuclear power plants typically
buy their fuel 3-5 years ahead of time, so unless world governments can somehow
ramp up their efforts to dismantle bombs, we’ll be looking at a substantial
uranium supply crunch.

Of
course, none of this de-weaponized uranium is being sent to , or
or anywhere outside of ,
the
or the EU.

That’s
the problem: cheap uranium, like cheap oil, is getting increasingly difficult
to find – and artificially low uranium prices bolstered by government
stockpiles has a deleterious effect on uranium miners. As more uranium miners go out of business or
sit on their supply, more of the government’s uranium will be depleted.

That’s
the most exciting factor for me: supply. We know the stockpile of de-weaponized uranium is falling, and quickly,
with no certain plans to add more.

How
to invest? Given some of the uncertainty involved with the nuclear summit in
right now, it might be best to wait and see what, if any plans come about in
terms of future nuclear weapon dismantling. The only news that would convince me that uranium prices aren’t headed
higher would be a very specifically outlined plan and timeline to dismantle
more weapons for nuclear fuel.

I
have a feeling that any other news will be very bullish for uranium
prices. One way to gauge the health of
uranium prices AND nuclear power generation is to look at the nuclear iShares
ETF that tracks both uranium miners and nuclear power plant stocks: NUCL 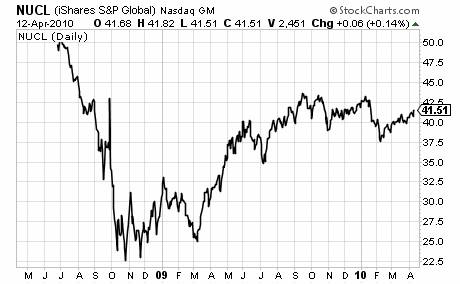 I
wouldn’t recommend buying this ETF as a way to profit from rising uranium
prices, but I think it’s a good way to see the overall vigor of the
industry. Keep an eye on this ETF as the
Nuclear Summit wraps up.

Today,
I’ll be chatting about uranium with the best energy analyst I know of: Gregor
Macdonald, the chief analyst for Energy World Profits. I’m hoping to add a uranium position to the
Energy World Profits portfolio if he agrees with my findings. If you’re interested in investing in energy
stocks, I suggest taking a look at Energy World Profits – our advisory
service all about energy. You can click here to take a 30-day test
drive to see if the service is for you, and if it’s not, we offer a money back
guarantee.