"It’s likely, and possible, for silver to eventually make new modern-era inflation adjusted highs. According to my most conservative calculations, that would mean a silver price above about $130 an ounce – or 300% higher than current prices. That’s right, when silver makes a new inflation adjusted high, it will mean a quadruple for investors who buy today at around $25.50 an ounce.

What about a non-modern era inflation adjusted high? For a pie in the sky number, the all-time high for silver was reached in 1477.

I still believe we’ll breach new record highs in silver – and I stand by my prediction of $130 an ounce or so.

I’m still buying physical silver, as well (and you’ll be the first to know when I stop buying and start selling).

And hopefully you’re well aware of the main reason that I prefer to buy physical silver – but here it is again:

I buy physical silver (and gold) to protect some portion of my cash savings from the likelihood of currency crisis and inflation. I don’t have the expectation of getting rich from my physical silver and gold holdings – but I expect my holdings will be safe from government fiat.

That explains the "why" but it kind of glosses over the "how." Because I fervently believe that we’re currently in the midst of a very serious international currency crisis. And I believe that this currency crisis will eventually and continually be unwound with ever greater inflationary measures from central bankers around the world.

That’s the "how." Central bankers are in a real bind. They’re having a hard time financing debt with actual investors. Who wants to buy Treasuries that yield next-to-nothing?

Have you bought any Treasuries lately?

Where’s all of this money coming from to buy the debt of broke Euro nations like Spain and Italy? Who’s buying all of these Treasuries?

It’s coming from other broke central banks, not least of which is the Federal Reserve. 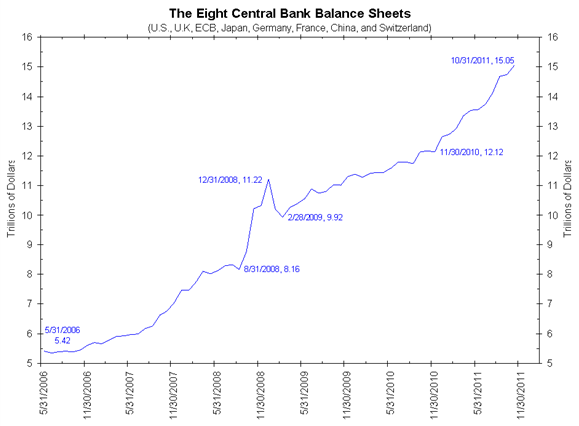 How will these debts unfold?

President Obama and other Western leaders would have you believe that they have everything under control. They’ve apparently found a silver bullet that simultaneously create massive amounts of currency out of thin air, and also keep inflation under control.

I’m not buying it. Which is why I’m still buying physical precious metals.

Today, however, I’m going to talk about a way to multiply your investment with a small, unknown silver stock. The very same trends that will play out to undermine world currencies will make it very profitable to be the owner of quality precious metals securities.

Unlike my physical bullion silver, a timely and prudent investment in a "junior" mining company can return your capital to you many times over – vastly outpacing inflation and typically trumping the gains of any other asset class in any bull market.

There’s a reason that the phrase "gold-mine" has been so overused to refer to anything with the potential to make you extremely wealthy in very short order.

Simply put: the profitability and manias associated with precious metals mining is the perfect recipe for massive capital gains.

The only sector of the market that even comes close in terms of potential for gains is the bio-tech sector. But I’m not science-savvy enough to figure out what makes for a good bio-tech company – and unless you have a degree in biochemistry or you’ve worked in the field, the deck is stacked against you in that field.

But in the precious metals sector, it’s a matter of knowing how much gold or silver is in the ground, the cost basis per ounce to get it out of the ground and the likelihood that a given resource will be mined in the near future.

Which brings me to this month’s recommendation… which I’ve just sent out to Resource Prospector Pro members. If you’d like to take a sneak peak at this research, click here to kick the tires and see if this service is right for you.