What does money
cost? According to the Wall
Street Journal, each new $100 bill set to be introduced into circulation on
February 10, 2011 will cost the Treasury 11.8 cents to produce. Complete with holograms, security fibers,
bells, whistles, kazoos and probably a computer chip or two, poor old Ben
Franklin is starting to look a little perturbed with all of the baubles
encroaching his paper real estate.

So it costs about 12 cents
for the Treasury to make $100, but what does it cost to buy it? That’s what the interest rate is: the cost of
money. Interest payments you make on
money loaned to you is the price you pay for borrowing. Nothing’s free, especially not money.

When the price of money gets
higher, it signals a weakness in the forward purchasing power of the underlying
currency. The best way to protect
yourself from a weakening currency is to buy commodities. More on that in a second…

If long term bond rates
rise, it means that folks who lend money to our government are demanding higher
returns on their principle.

Additionally, bearish news
for stocks is almost always bullish news for commodities. I’ve shown how this trend works in this
recent issue of the Resource Prospector.

So where is the cost of
money headed? I can say for regular
folks like you and me it’s already much higher than the .118% rate the Treasury
pays for each $100 bill. And right now,
long-term interest rates are beginning to rise.

As I said, the best way you
can protect yourself from higher interest rates is to get out of long-term
bonds, and into commodity based investments.

The obvious investment is
gold. When interest rates began their
meteoric climb in the late 1970s, that’s when gold climbed to its peaks. As you can see from this chart, gold
eventually fell as Federal interest rates remained over 10%. 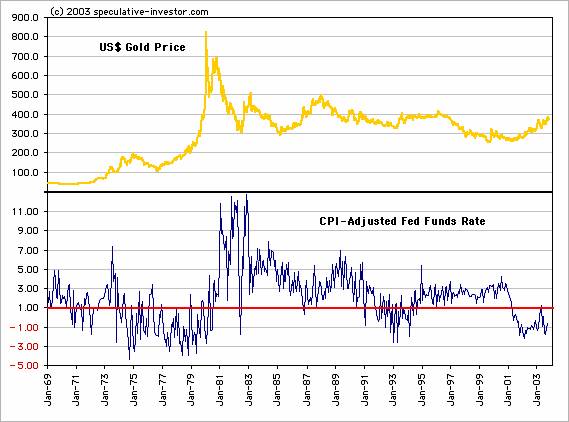 But interest rates are still
very close to their historic lows. Think
about this fact next time someone tells you that gold is in bubble
territory. And as the long-term Treasury
rates rise, they’ll be a lagging indicator for gold prices.

If you take a closer look at
the chart above, you can see that gold prices hit their highest highs at the
beginning of 1980, and that interest rates peaked at the beginning of
1981. The good news is that even if you
waited until rates jumped over 10%, it wasn’t too late to lock in the lion’s
share of profits in your gold investments.

I’ve talked about gold
investments before – and by the way, I’m still waiting on a single argument
AGAINST higher gold prices: email me at [email protected]
if you’re not bullish on gold.

But until gold prices peak,
there are two basic investments you can make. One is to buy physical gold. Doing so can be expensive, and when you take delivery, you have to find
an appropriately safe place to store your gold.

I’ve recommended buying gold
(and silver) from Kitco.com and Blanchard. Both of these online precious metal retailers
are professional, safe and both offer a buy-back guarantee. I have no affiliation with either company,
but I’ve bought precious metal from both of them.

The other way to invest in
gold is to buy shares of companies that mine, refine, and explore for gold.

And like any other
investment, there are different classes of gold stocks. Some are extremely volatile micro-caps that
have the potential to return your money thousands of times over. Others are billion dollar “blue-chips” that
typically return 2-5 times higher than gains made in gold.

Right now, we’re
recommending two blue-chip gold stocks and one gold micro-cap in our Global Commodity Investing
portfolio. So far, these companies have
posted 102%, 52% and 35% gains, for an average gain of 63%.

Not bad. And I expect these companies to continue
their march upward along with gold. With
higher interest rates right around the corner, there’s no better time to start
or add to a position in gold investments.

And if you take a trial
subscription to Global Commodity Investing, we’ll let you know exactly when to
get out of gold – which is at least as important as knowing when to start
investing in the yellow metal.