And yet, the numbers don’t lie.

Even after the financial crisis – which, at the very least, happened under the profitable watching eyes of the world’s largest banks – and after many banks received many billions of dollars of taxpayer loans, bailouts and forgiveness…

Even after all of the funny business on Wall Street – banks are more profitable than ever.

The additional “rules and regulations” laundry list piled on by lawmakers hasn’t so much hamstrung large banks as it has prevented smaller banks from gaining market share.

Instead of a more diversified and responsible banking system, we have FEWER banks with MORE deposits and about the same amount of shady behavior.

If the chart below is any indication, it looks like the financial crisis CAUSED bank deposits to skyrocket: 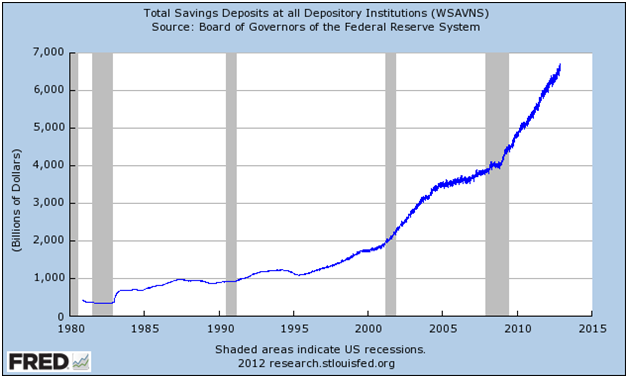 Moreover, most of these increased deposits have gone to the biggest banks. 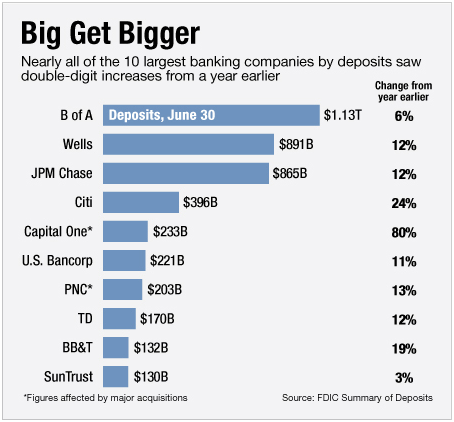 You see what’s happening here? In the past 20 years, there are fewer, bigger and more reckless banks holding more cash than at any other time in world history.

For one terrible example, Bank of America (NYSE: BAC) has more deposits BY ITSELF than the entire banking industry did back in 1992 when Bill Clinton was President.

Meanwhile, the Fed just today announced that they’ll add another $4 trillion to the fire in the form of $45 billion in new monthly bond purchases. Remember that Obama is talking about raising taxes to collect another $80 billion PER YEAR, to put this ridiculously large sum in perspective.

Where do you think that $4 trillion will end up?

At your neighborhood credit union? In your paycheck? In your township’s coffers? In your 401(k)?

No. It will end up backstopping the financial industry at the literal expense of every single taxpayer and dollar holder.

If you don’t own gold for any other reason, you should own it because it’s completely out of the control of the largest banks out there – banks that are running roughshod over the dollar with the collusion of the federal government and Federal Reserve.

I’m not interested in conspiracy theories – but this one isn’t a theory. It’s happening before our eyes. The charts and data I’ve posted today should spell it out in excruciatingly obvious detail.

Our currency is being taken over by the biggest financial institutions in world history, and no one seems to even care.

What choice do we have but to buy gold and silver?