For the sake of this daily letter, I’m not a Republican, or a Democrat, or a Marxist or an Anarcho Capitalist.

Because politicians can’t argue with math. They can’t bribe math or extradite math to Guantanamo Bay.

And today, math tells us that Greece is in big trouble.

Here’s what math has to say:

The annual GDP of Greece comes in at around $330 billion.

According to the International Monetary Fund, Greece will owe close to $500 billion by the end of 2011.

That’s a magic debt level – when you owe 150% of your GDP, it basically becomes impossible to get your head back above water. Default is the only option left. Austerity won’t cut it because you’re at a point where you start to have a hard time making interest payments – let alone the principle. Tax increases won’t make a dent because people will simply stop paying taxes.

So, we’re talking about default now. And there are basically two different types of default.

1) You tell your creditors they won’t be getting paid back. Ratings agencies consider it a default even if you skimp on one penny of what you promised to pay back.
2) You inflate your currency to make servicing the debt cheaper.

Since Greece finds itself in the warm bosom of the Euro-zone, it can not simply print its way out of debt. So, now we enter into two more possible default scenarios.

1) Greece restructures its debt (which is a form of default) to extend payments out even further — which essentially just means they’ll postpone the inevitable
2) Greece gets kicked out of the Euro-zone, and the entire amount of Euro-based Greek debt is washed away.

Now, either one of these last scenarios would be disastrous for the Euro — but it’s a question of how bad. If Greece gets kicked out of the Euro zone, all of the other members will take a serious and immediate haircut.

But that haircut will arrive anyway, someday. 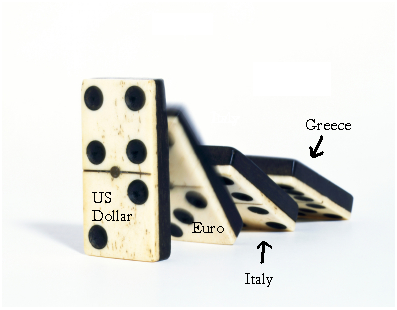 Right now, the Greek domino is about to clobber Italy and Spain. If those two go down, the only thing holding the Euro domino up is Germany. And while Germany is a powerhouse economy, they have a recent history of behaving poorly when they’re asked to assume the debts of Europe.

These dominoes are falling, and though the Atlantic Ocean is wide and deep, a Euro debt crisis will hit the US dollar.

At first, it will cause investors to pile into dollars, in the form of US Treasuries and other dollar denominated assets. The dollar will likely rally, and most other assets will take a bath.

Politicians and populist economists like Paul Krugman and Robert Reich will tell you that debt is not a problem for a country that can print its own currency. They fail to realize that rising prices for food, fuel, housing, not to mention failing state and local governments will be a problem.

So the solution as far as I can tell is to make sure you do own enough physical gold and silver.

Also be prepared for your favorite stocks and assets to correct if and when investors flock to the dollar. It will create a buying period in the eye of the storm.