In case you weren’t paying attention, the Swiss just closed up shop on the Franc.

Until last week, the Swiss Franc traded freely – tied only to the Swiss government and financial system.

And since the Swiss government is generally much more robust, less debt-ridden and generally more prosperous than most other developed world governments, investors fled the Euro in record numbers, pushing up its conversion rate against other world currencies.

You can see the effect of the Swiss Franc’s appreciation by looking at this 5 year chart of the US Dollar-Swiss Franc exchange rate: 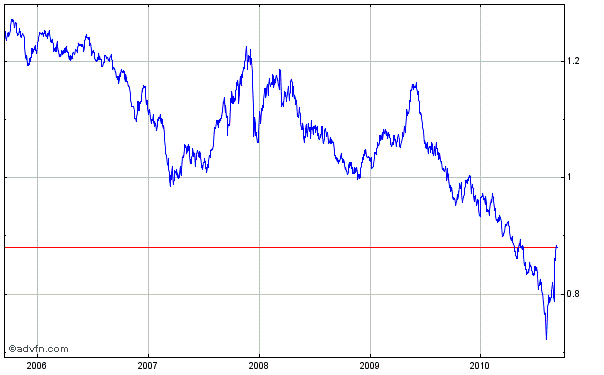 Five years ago, one US dollar bought 1.3 Swiss Francs. And until recently it bought about 0.8 Francs.

Now, I’m not a ForEx trader – but I do have some cash savings outside of the US – for the simple reason that there really are currencies with more credibility than the US dollar – as in, almost all of them.

More people are waking up to this fact every day. And it’s not rousing them gently with kind words – it’s a bucket of cold water hitting them in the face. And these folks get motivated to put a stop to the nonsense. They open up bank accounts in countries like Canada, China, Norway – and until recently: Switzerland.

In a world of dishonest paper money, the paper Swiss Franc soared relentlessly for the simple fact that it was more honest than the rest of the alternatives.

But last week the Swiss decided they had enough of being honest, and they tied the Franc to the fastest sinking millstone in the currency world: the Euro. Now, the Franc is locked in at an exchange rate of 1 Euro per 1.2 Francs.

I call it "fiddlesticks."

It’s a bad move – though in the short term it will probably help Swiss exports. But in the long run, it will be disastrous for the Swiss. It’s always disastrous when governments forcibly decide to devalue their currencies.

I’ve used the analogy of peeing yourself to keep warm on a cold day. Yes: at first you will experience a burst of warmth, but eventually you’re colder than ever.

Think about it: would you rather have a currency that maintains its value or one that loses its value?

Moreover, wouldn’t you be at least a little bit annoyed if your government’s wealthy central bankers simply decided, by the stroke of a pen, without a vote, referendum or act of law – to devalue your savings and spending power overnight?

And for what reason?

Because they want to give the export industry a short-term reprieve?

Is it for some misplaced sense of duty to the Euro-zone?

What I do know is that there’s just one less place to put your money if you don’t want to see it spin `round the toilet bowl of international currency devaluation.

Which means that gold and silver are now an even better alternative than they were before.

Where else can honest people put their cash savings? If the trustworthy Swiss aren’t outside the reach of global banking pressure, what currency can be?

One last thought for today.

We know that the world’s central bankers do not want to lend more credence to gold and silver. Gold and silver are money – and the higher their prices, the more people begin to realize that their flimsy paper currencies just aren’t that great.

So I don’t think it’s outside the boundaries to expect some kind of currency controls on gold and silver – down the road. They might not be able to control the price, but they can make it more difficult and expensive to own physical precious metals.

Taxes, restrictions, regulations, paperwork – and the many other sundry tools of bureaucracy are on the table.