We live in such strange times that it's difficult to know which way is up.

But today, market participants are more apt to notice gold's amazing 11 year bull run – when instead it would probably make more sense to pay attention to how poorly the dollar has fared.

An 11 year bull run is almost outside the realm of possibility during normal times, but instead of noticing that we're not in normal times, investors believe gold to be in a bubble -not that the measuring stick we used to measure gold's price has changed length, width and shape.

The overwhelming message from news outlets and analysts alike is that gold is expensive. But if you take even a cursory look at the amount of dollars in existence vs. the amount of gold the United States own – you see that the opposite is true: gold is relatively cheap. 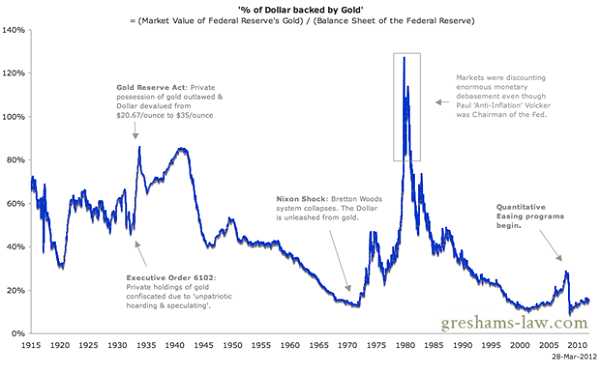 Rarely before in American history have so many dollars been supported by so little gold.

It's a huge and pervasive mistake to look at the price of gold (in dollars) and to come to the conclusion that gold is expensive. It's one of the biggest misconceptions about any market during any point in history.

If the supply of gold AND the supply of dollars was constant, it would be a perfect comparison to look at upward price movement and to come to the conclusion that gold expensive.

But not even people who bitterly despise gold and believe it's in a bubble would deny that there are more dollars in existence than there were 5, 10, 20, 50, or 100 years ago.

The fact is gold is in a bull market. But the real reason is that the dollar is in a long term bear market. Moreover – nearly all currencies in existence from the Euro to the Japanese Yen, the Mexican peso, the Canadian dollar – they're all losing value.

So gold stays still while its measuring sticks shrink by the day.

And most of the world's investors, journalists, politicians, bankers and citizens are fooled into thinking that gold is growing – while ignoring the fact that currencies are circling the toilet bowl.