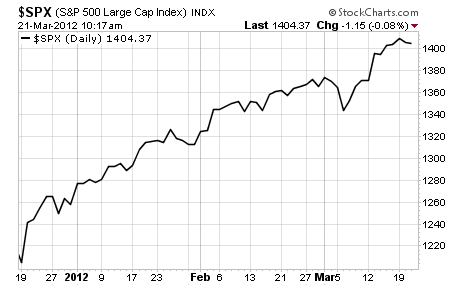 December 19 is arguably the beginning of this latest bull-run in the broad stock market.

I understand that it’s extremely difficult to think about stocks in terms of the long term. The fact is, most investors are INCAPABLE of thinking about stocks for any period longer than 3-6 months. That’s the largest block of time they can conceptually understand or all they have the memory for.

And while I’m sure many investors have been and will continue to be lured into this market, we’re still not in a long-term bull market for stocks. 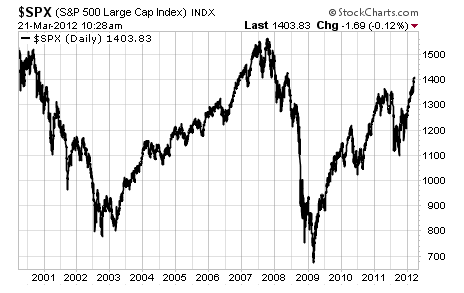 So what’s going on?

Here’s something you won’t hear anyone say: we are in a secular bear market for stocks.

Read it again: we are in a secular bear market for stocks.

A bear market is typically represented as a long period of sideways trading with lots of ups and downs.

It’s also designed to fool the masses into believing that it’s not really a bear market.

Today, most folks look at the run-up of the past 4 months, and they’re convinced that the market can only go higher.

But the biggest trap right now is dividends. People have nowhere else to turn. Fixed income isn’t yielding anything. The bond king Bill Gross just announced that the bull market in bonds will end soon.

"It doesn’t mean the beginning of a bear market, but it does suggest at least that the great bond bull mark since 1981 is probably over."

So where are they turning? Dividends. And publicly traded companies know it. Tons of companies are paying dividends when they have no business doing so.

As he says, "These are referred to as Dividend Deals. The borrower takes on new debt in order to pay a stock dividend to common shareholders. (I prefer to see dividends paid from cash flow from operations, not new debt.)"

Right now, Wall Street is highly aware of the thirst for dividends. So they’re pulling all the levers they can to rejigger the slot machine in order to trap retail investors.

And if you think you’re immune because you’re more focused on commodity-related companies, think again.

Here’s just one example of a company that pays dividends for no good reason: Seadrill (NYSE: SDRL).

Seadrill currently plans to pay out about $3.20 per share in dividends.

But they’re only bringing in about $3 per share in earnings!

Does that make sense? How can this company pay out more in dividends than they earn?

They can’t. And unless they experience some huge amount of earnings growth in the next quarter or two, they’ll have to cut the dividend – or they’ll have to go further into debt.

But most investors will ignore the ridiculous debt loads, the unsustainable dividend payout, and only see that the company pays an 8% annual yield at the current rate.

That’s all they see. And they buy.

What do you think will happen to this stock when the dividend gets cut?

Do you want to own a company that funds its dividend with debt?

Do you want to buy such a company when it’s just off of its all-time highs?

If so, Seadrill is your company.

My point is: don’t fall for the dividend trap.

If you don’t do the smallest amount of research into these companies, you will fall into some form of trap – because Wall Street knows what people want, and they’re more than happy to sell it.

Here’s to knowing the trap,