I'm currently in Toronto, attending an annual conference hosted by the Prospectors and Developers Association of Canada (PDAC).

If you haven't already, take a look at yesterday's issue – where I explain why you probably shouldn't buy junior resource companies.

Savor these articles – the PDAC only exists because of the massive amount of junior mining companies listed here in Canada.  If the PDAC catches wind of my less-than-rosy depiction of their bread and butter, they may be disinclined to invite me back next year.

In any event, if you do have risk capital at your disposal, today I'd like to point out the ONLY two times you should buy a junior mining stock.

Now, I'm focusing mostly on gold and somewhat on silver, but you can probably look at just about any small company in much the same way. By small, I mean less than $250 million market cap.

Jr. companies differ vastly even from their mid-cap cousins in the metals space. A company that sells for $1-$5 billion market cap usually has a very strictly defined resource. They're already mining lots of gold and/or silver. We already know what their output is likely to be over the next 1-10 years.

So, all of the mystery and risk is no longer there.

The company is easy to value and understand – and the profits associated with such a company are typically pretty ordinary, and entirely based on the price movement of the underlying metal.

There's a lot of uncertainty – and that uncertainty lets us buy these small companies usually at a huge discount to the gold they claim to have in the ground. I heard a presentation yesterday from Robert Washer CEO of a company called Dynasty Metals (TSX: DMM) claiming that buying his company today is like buying gold for $18 an ounce – a 99% discount to the gold in the ground.

That sounds great, but it really just underscores the fact that his company probably has about a 1 in 100 chance of getting that gold out of the ground. The market is pricing Dynasty with those odds – and it's likely that those odds will increase if the company's team of geologists and engineers can and do produce compelling discovery and drilling results.

The great thing is – even if those odds only get up to 3-5 in 100, today's investors could triple or pentuple their stake.

Which brings me to the two types of junior miners you should buy – if you're going to buy one.

Nine years ago, Endeavor was in the exploration stage. That's when a company is searching for resource – they're drilling lots of test holes just to see what kind of resource they could potentially have.

As these test results hit the market, you typically see a huge upswing in the share price. 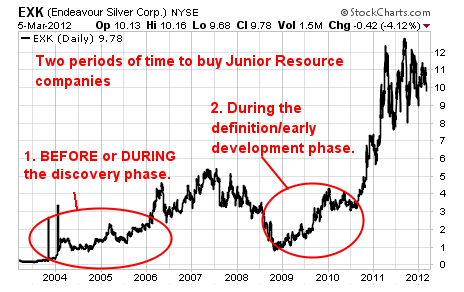 Then there's a period when the company doesn't have much news to bring to the market. That's when they've received the capital they need (sometimes from share dilution during the excitement of phase 1), and they're working to get their mines built, their resources further defined and their picks and shovels on and in the ground.

It's a boring time – and the market loses interest. Typically, the company's shares will actually drop back close to the pre-discovery phase prices.

This exact scenario played out in 2009 for Endeavor. The company focused on development – and there just wasn't much in the way of substantive news to keep the market interested.

Helped along by the recession, shares dropped back to $1 briefly, and stayed below the "excitement" prices of the discovery phase for much of the next two years.

That's when Tyler Laundon recommended shares of Endeavor to his subscribers: in June of 2010 – just before the company really started to really ramp up its production. Today, his subscribers have more than tripled their money in Endeavor.

So there you have it, the two times you should buy a jr. mining company:

1) Before or during the exciting discovery phase.

2) Before or during the boring development phase.

Tyler focuses most of his time looking for companies that are either on the cusp of production or are on the cusp of vastly increasing production. For his subscribers, that's the sweet spot of risk-reward.

The problem of course, is that you never really can know for sure if a company will be a success – either in the exploration stage or the production stage. There's risk. But there's also reward.

If you want one company in each stage to do some further digging on, I'd recommend taking a look at Dynasty – they seem to be in that discovery stage. They're still super small at about $100 million market cap. And if you believe Dynasty CEO Robert Washer, then you're buying gold in the ground for $18 an ounce.

If you're looking for a company in the boring pre-production stage, then I suggest taking a trial subscription to Small Cap Investor PRO. Tyler and I just watched a presentation from a company that Tyler added to the Small Cap Investor PRO portfolio a few months back. It's a company in the same sweet spot Endeavor was in two years ago. They're on the cusp of huge production growth – and their shares are still cheaper than they were during the exploration phase.

You can take a completely risk-free trial to Small Cap Investor PRO by clicking here now.