I’m generally suspicious of “green” energy investments – mostly because they seem to be political constructs rather than actually good opportunities. To differentiate: a good investment doesn’t require huge subsidies from the government in order to
succeed. Right now, there are precious few alternative energy companies that can turn a dime of profit without massive subsidies from governments around the world.

For me, the investment implication of green energy has been to leave it out of my portfolio entirely.

But then yesterday, I received a very good question from reader Bill M. who brought up an interesting idea about actually shorting such companies:

“I have a question for you.Governments are spending a ton of tax dollars supporting all manner of “green” initiatives: wind, solar, ethanol, electric cars, curly-cue light bulbs, green roofs, LEED certifications, housing insulation, etc. etc. Governments have passed all sorts of quotas for renewable energy. All sorts of companies, from start-ups to GE (NYSE: GE), have attracted billions in government dollars and private investment to capitalize on this green wave. How does a cut-throat, uncaring, capitalist monster (like me) make money off what I expect to be the balloon popping on these over-inflated green companies who, when forced to compete on their own without their government sugar daddies, are going to sink like a rock? Are there funds out there making contrarian bets?”

So, to summarize Bill’s question – are there funds or investments out there that are a direct bet AGAINST green energy initiatives?

I’ve talked at some length about why I have little faith in the alternative energy sector in general. Solar, wind, geothermal – they all fall short in sustainability, accessibility or supply.

And like Bill, I suppose I’m “a cut-throat, uncaring, capitalist monster” who thinks that shorting such initiatives might not be such a bad idea. I’m just a little bit irritated that I didn’t think of it first…

After a cursory search for inverse-green ETFs, I haven’t had any luck.If you know of any ETFs or stocks or even mutual or hedge funds that specialize in shorting green energy, please send them my way at [email protected].

I did, however, find a slew of ETFs that focus on specific and general green energy initiatives. And I found three in particular that anyone with a brokerage account can sell short in a variety of ways.

It’s not exactly what Bill is looking for – but shorting these ETFs is the same idea. You can borrow shares and sell them short, like any stock, or you can trade options that will rise in price as these ETFs twist in the wind.

The first two in the list are general alternative energy ETFs that hold a variety of solar, wind and other green stocks. The third focuses entirely on solar investments, and holds a basket of a couple dozen companies.

If you believe, as Bill and I do, that broke governments around the world are eventually going to pull the rug out from underneath green energy subsidies, then you should think about shorting these ETFs.

Even with government subsidies, these three ETFs haven’t done very well over the past year: 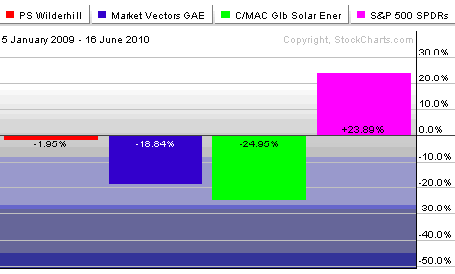 You can see how the broad market, as represented by the S&P 500 is still up almost 25% over the past year – but during that same period the three “green” ETFs are down between 2% and 25%. If these stocks can’t even do well during a sustained uptrend in the broad market, I don’t see how they’ll do well in a down market.

It’s a little complicated, but if you want to trade options on these ETFs, you should try to buy in the money puts as far out as you can – which is only six or seven months out for these particular ETFs. These puts should rise in value on a one-to-one ratio as the underlying ETF falls in value. That’s the safe way to short these ETFs, because your downside is limited to the price of the put.

The other, less complicated way is to just simplify the whole process, and try to buy companies in the energy sector that are going to benefit from continued use of proven energy sources – like coal, oil, and natural gas.

I’ve talked about buying a Chinese coal company that’s vital to continued growth in that country. China currently uses three times more coal than the United States, and they get over 75% of their electricity generation from coal. They’re forced to import more and more coal every year, which makes their domestic coal companies extremely attractive. China would have to cut way back on coal usage before they slowed domestic demand – so this Chinese coal company is extremely attractive right now. You can read the full write up on this company by clicking here.

I’ve also mentioned three companies that currently are producing oil and gas in the Bakken region of North Dakota. According
to The Wall Street Journal, the Bakken “could contain as much as 413 billion barrels of oil in place… That’s bigger than Saudi Arabia’s Ghawar field, which has 125 billion barrels.”