Most people don't want to have to worry about their investments. They want to, as my wife's mother Virginia says, "throw money into a hole and hope for the best that it will be there when you need it."

And while there are certain advantages to this strategy, it's not always the best idea. When stocks are in a long term bull market, then yeah – go ahead – throw money into a mutual fund and you'll probably make out alright.

But that's not the world we live in today.

And while I know many of you are concerned about the recent sell offs in gold and silver – especially gold and silver stocks – I must strongly caution you not to join in the crowd of sellers.

Let me remind you: world central banks are still insolvent. The U.S. Federal Government is still the most indebted nation in world history. The Euro-Zone is on the brink of total collapse.

But these institutions know no other way of solving their debt problems besides running the printing press.

The current selloff has everything to do with the rising dollar (as I wrote yesterday) which is largely a function of a falling Euro. Additionally, European investors and institutions are dumping everything in order to raise cash to keep their heads above the rising flood of debt and insolvency.

Yes, even including gold and silver stocks.

So, if you're asking yourself if you should also be selling, you should think about the people who are selling right now. These Europeans are selling their most prized assets as a short-term stop-gap just to make the pain go away for a little while.

Is that a group of people you want to take financial marching orders from?

No. When Europeans are selling out of fear and pain, we should be buying.

I know it feels risky and a little scary to be a buyer now. But the right time to buy never feels right. It always feels uncomfortable and strange.

If you're not convinced, I'd like you to look at just one chart.

It's a five year gold chart with a simple 200 day moving average. 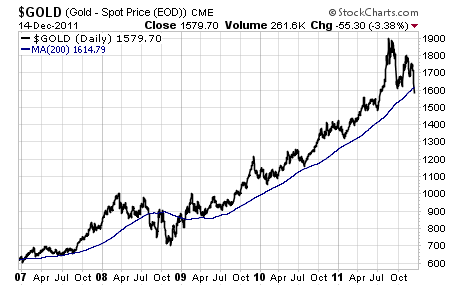 Waiting for gold to move below its 200 day moving average (DMA) has been one of the most profitable ways to average in to gold.

Buying then resulted in a 100% gain over the following 24 months.

That sounds like a great indicator to me. So if you're like me, and you're a commodity bull, you should be licking your chops over this price action.

I'll be buying more gold in the near future. And I hope you will too.