If you’re not buying commodity assets when they’re at or near multi-year lows, then you’re not going to be super successful.
And when you’re in the midst of a secular bull market, you have to pounce on these types of opportunities – though it always feels “wrong” when the time is perfect.
Today, Cameco Corp (NYSE: CCJ), one of the world’s trophy uranium stocks, is selling near its one-, two- and three-year lows.
I’ve written about this company extensively in the past, and I’ve previously called it a strong buy under $20 a share. In fact, here’s what I wrote EXACTLY one year ago about Cameco:
“Cameco’s profitability is closely tied to the price of uranium, and uranium prices have a floor under them. That’s because there’s a very long lead time for uranium consumers. It’s not like you can just shut off a nuclear power plant. These plants consume a steady and reliable amount of uranium – and they consume the same amount whether uranium is $50 a pound (as it is today) or whether it’s $130 a pound (as it was in 2007.)
“So we know that Cameco is hated and ignored. And it’s not likely to see a substantial hit on earnings or profitability because uranium isn’t likely to get much cheaper than it is now.
“I like Cameco under $20 a share.
“And if you can’t get excited about Cameco, then I totally understand. But maybe you can get excited about a 2.1% dividend. Cameco’s dividend currently yields more than the 10 Year US Treasury.
“So you can hold your nose and collect this dividend while you wait for some price appreciation.”
So a year later, Cameco is in the exact position it was a year ago – and it’s again bouncing off of lows. 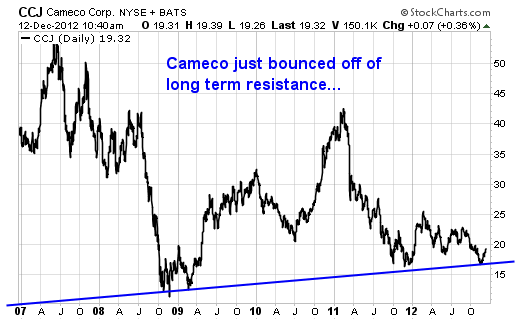 It’s also still paying that Treasury-beating 2.1% annual dividend yield.
It’s still the largest uranium company (by a long shot) – and the world still needs uranium.
So, here we are again – with another chance to buy this world-class stock at a low price.
When you’re given these chances, you have to pounce. Right now, the weak hands in the commodity space are selling. They’re afraid the bull run is over. They’re dumping shares of Cameco and other solid companies. Be the smart money. Take their shares off their hands.
We don’t get too many chances like this one.