To QE or to not QE? That is the question.

Whether ’tis nobler in the markets to suffer

The slings and arrows of outrageous inflation,

Or to take arms against a sea of deficits,

And through austerity, end them.

Recently, I sat in on a meeting with the top researchers, analysts and investment gurus here at Wyatt Investment Research. In one room sat many decades of investment experience, two MBAs in Finance, and each person with a specific skill-set that’s unmatched anywhere outside of a multi-billion dollar i-bank or fund.

One of the bigger questions we tackled: Will the Federal Reserve continue its quantitative easing (QE) program?

For most of the folks in the room, it wasn’t much of a question so much as a foregone conclusion.

For better or worse, the Federal Reserve concerns itself with pushing the stock market higher.

Fed Chairman Ben Bernanke publicly states this position. In a Washington Post article written by Bernanke on the eve of QE2, he came right out and said so:

For the answer, let’s take a look at a chart of the Dow Jones Industrial Average, an index of the 30 largest publicly traded companies on the New York Stock Exchange. 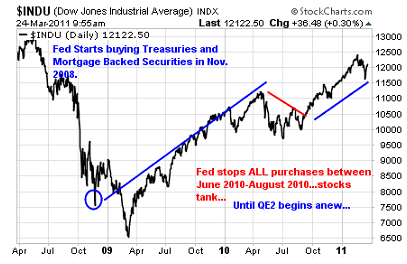 So the question isn’t "will the Fed start QE3 soon or let it end?", so much as it is, "Will the Fed continue boosting stocks, or will it let them fall?"

Bernanke has made his choice abundantly clear in words and actions.

But that do those words and actions mean for commodities?

I’ve posted a chart below showing the price of gold recently. 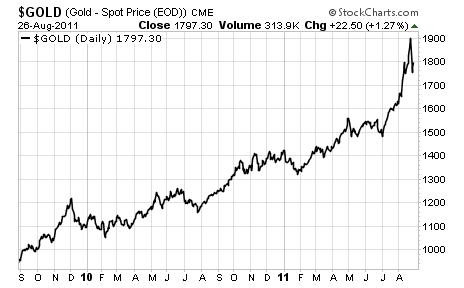 The same trend is in place. Gold and stocks are behaving almost exactly the same during this era of QE.

The problem for Bernanke is that he likes stock prices to up. Pushing stocks is what you might call an intended consequence of QE.

But gold is becoming a substitute for the dollar as a currency. As more people flock to gold, especially those folks who own physical gold, that’s bad news for the dollar. So, that’s what you might call an unintended consequence of QE.

Higher stock valuations, according to Bernanke, spur growth. But gold just sits there. The only people who benefit from higher priced gold are gold miners, and currently, less than 1% of stock market investment capital is locked up in gold mining companies.

Bernanke wants to have it both ways: he wants stocks to go up, but he doesn’t want to completely erode the dollar by forcing people into gold. And who would sell their gold as long as Bernanke is running his QE programs?

He’s stuck. If he ends QE, he strengthens the dollar, but kills the stock market.

If he continues QE, he strengthens the stock market, but kills the dollar.

My prediction is that he will continue QE in the near term. It might happen this November – like it did last year. Or it could come sooner. Or later – but I believe it’s coming.