Today I’ll discuss the most important two-word phrase you might ever hear as a commodity investor. That’s because many (if not all) commodities
are tied to strong cyclical seasonal, supply and demand trends that tend to
repeat themselves. Mean reversion is another one of those tools the big-shot commodity traders use – but it’s simple enough that you and I can follow along with a regular brokerage account.

To break it down
I’ll define these words:

Mean: the
average, or normal level.

Reversion:
the act of returning.

When you have a trend that
continually manifests itself over a period of many years, in many different
markets, you can make low-risk investments when that trend is outside of its
normal range. There are about as many
mean-reversion trends as there are commodities, and I’ll examine many of them
as they become relevant, but for now, I’m going to focus on one of the easiest
to understand and potentially most profitable.

I’m talking about the
gold-silver ratio. The modern mean (ever
since the 1870s when the U.S.
government de-monetized silver and went to the gold standard) has been a ratio
of 55.

So, in modern history, it’s
taken 55 ounces of silver to buy one ounce of gold. Before that, the ratio was much lower – in the
16 range. That’s much closer to the
ratio of silver to gold in the earth’s crust – and as I’ll discuss in a minute,
it could revert to that ratio again.

For time being, I’m more
interested in the modern ratio. That’s
because the modern ratio has reverted to mean hundreds of times since the 1870s. It’s as solid a mean-reverting trend as you’ll find. And right now, it’s “out of whack” to use a
colloquial term.

Invest with this ratio, and
you could make the safest 10%-20% you’ll find in any market at any time.

Take a
look at the chart below, and you’ll see what I mean:

Lately, the ratio hasn’t
been behaving normally, but that situation will correct itself. It always has. Right now, with the ratio at about 64, silver
is undervalued related to gold. The gap
will close, and silver will inevitably revert to a ratio of 55 or lower. It might take a year, and the ratio might drop
even lower, but I’ll conservatively estimate you could make at least 10 percent
in the next year just by buying silver today. Of course that’s not the only possible scenario. Silver could stay the same and gold could go
down in price. Or both could fall
relative to the dollar. But I think it’s
far more likely that silver will rise.

A 10 percent gain in silver
prices would move the metal to the $19 range from $17.30 today. That’s not unrealistic, especially since
we’ve seen $20 silver in the past 18 months.

Of course,
there’s the potential for a much bigger move upwards in silver’s future, for two
reasons:

1.  Industrial metal uses consume 40 percent of all
silver produced.  The market for silver as such is somewhat inelastic
in a certain price range.  It does have substitutes, so if it gets
too expensive, industry will cut back on silver consumption.  You can
see how this might make silver somewhat range-bound – or stuck between two
prices. The low price being where
demand is fixed by industrial use, the high price being where industrial
use trails off as it becomes too expensive.  As the metal becomes
more expensive, industry will cut back, which lowers the price, and so on.
But if monetary demand hits a certain tipping point, the price could un-tether
from industrial demand.  If silver stops being an industrial commodity
and starts being "money" it could even revert to historical ratios
of 16:1 with gold.  The chart below shows how this ratio was the norm
for much of the last 1,000 years. 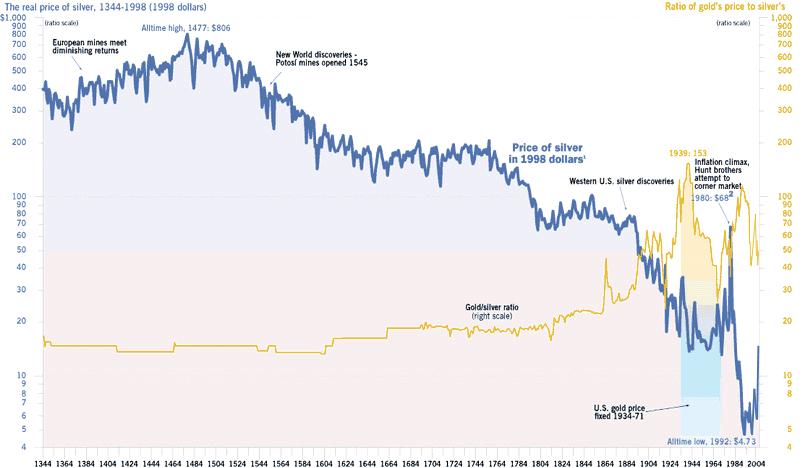 So, how can you
invest?

We’re planning to add a pure silver position to our Global
Commodity Investor portfolio in the next couple of weeks. We’re looking for an undervalued silver miner
that’s already profitable. Any bump in
silver’s price will have a huge impact on the share price of this type of
company. If you’re desperate for
exposure to silver, you could buy shares in the silver ETF (NYSE: SLV). As I said yesterday, I’m not a huge fan of
these ETFs, just because they don’t offer the protection of either the physical
commodity or the upside of a security. If
you’re as excited about the trend in silver as I am, you’ll want to give
yourself exposure to the upside in a silver miner that can boost the gains made
in the metal.

In the meantime,
keep an eye on the ratio. Editor Ian
Wyatt will be making a formal silver stock recommendation in an upcoming issue
of Global Commodity Investing. Click
here to take a risk free 90 day trial subscription and you’ll be among the
first to read about our favorite way to play the upside of the gold-silver mean
reversion trend.