Ireland recently joined Greece,
Portugal and Spain to round out the PIGS acronym of debt-downgraded European
nations.

It’s a legacy Europe won’t soon escape for a variety of
reasons. But I’m not going to talk about the largely boring reasons why
Europe has no chance of escaping massive debt obligations – I’m more
concerned with the immediate investment implications of such a
downgrade.

To help predict what might come next, it’s sometimes helpful
to look back. Over the last eight months, buying silver after a Euro nation
had its debt downgraded gave you an average one month gain of 2.6%. 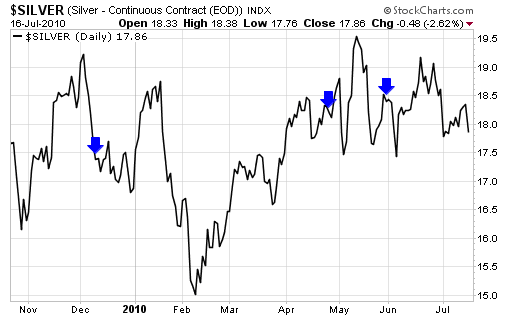 It all started with Greece being downgraded by Moody’s on
December 9, 2009.

Then on April 27, Standard and Poor’s downgraded Greece,
Spain and Portugal.

On May 29, they downgraded Spain again.

Okay so 2.6% is
nothing special, admittedly. But look at the competition – the stock market
is down an average of .9% over those same one month periods.

Perhaps I should be comparing silver to US Treasuries, as
these securities are the other side of the “flight to safety” coin. And over
the past eight months, short term Treasuries are basically unchanged – still
paying a miniscule 0.16% for one month bills.

Even the one year Treasury bills only yield about
0.3%.

But now that I’m talking about Treasuries, you have to
wonder what would happen to yields if the United States had its debt
downgraded…

It shouldn’t. A
credit rating agency downgraded U.S. debt from AAA to AA on July 13th.

That’s a huge drop. The only problem is…this rating is
from a new Chinese credit rating agency – not exactly the most respected
opinion out there. 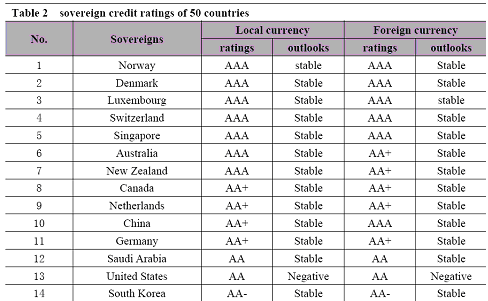 As it turns out, no one in the West is paying much attention
to this new credit agency – but there’s no reason why this firm isn’t right
in its assessment. The United States has trillions of dollars in unfunded
liabilities coming down the pike, and that’s not to mention the trillions in
U.S. Treasuries they have to roll over in the coming months…

This agency is not yet approved by the SEC as a Nationally
Recognized Statistical Rating Organization. I don’t know about you, but I’m
not going to hold my breath for the SEC to make the right decision about
anything that’s national, recognized, statistical, rated or organized anytime
soon. Dagong has a fairly transparent ratings mission. You can read their
entire
Credit Rating Report for free by clicking here.

Is China in the business of trying to usurp power and
authority from the West? Absolutely, but that doesn’t mean this agency is
wrong. I urge you to read the full report – if only because Dagong is the
ONLY ratings agency that isn’t under the umbrella of the SEC. Their
independence from the SEC is a good thing if you ask me.

So Dagong has basically the same rating for Greece, Portugal
and Spain as Moody’s S&P and Fitch. But to be perfectly honest, all of
the PIGS don’t amount to very much – but they still caused ripples in the
price of silver.

Greece, Ireland, Portugal and Spain
only account for about 3.8% of world GDP.

So 3.8% of the world’s GDP moved the price of silver an
average of 2.6% on a monthly basis – that’s close enough for me to call it a
wash. I could have cherry-picked some more relevant sovereign debt
time-tables and silver’s gains would have been more impressive.

Butimagine what
will happen to silver (and gold) prices if the United States gets downgraded.
The U.S. accounts for about 25% of world GDP.

The flight to safety of U.S. Treasuries might start to
waver…but I’m guessing that silver (which is currently selling at a
ratio-adjusted 20% discount to gold) would see a commensurate boost.

If you’re interested in getting started investing in silver
stocks, I recommend taking a look at a new product we just started in June
called the $100k Portfolio. It’s a monthly letter written by Chief Analyst
Ian Wyatt, and it’s filled with investments designed to turn $100,000 into $1
million over the next 10 years. Ian just added three silver stocks to the
portfolio. Click here to get the
full details on this new service.