Today, I’ve invited my boss Ian Wyatt to speak out
and share his perspective on the current state of the U.S. dollar. I
think you will find his thoughts and perspective very insightful.

Ian here. The U.S. dollar’s
bounce has driven a lot of the market’s turbulence lately. If you were
long the dollar recently, or investments that would rise with the dollar,
you’ve made money over the past two weeks.

If you are long commodities or precious metals
however, you’re down in your positions over the last two weeks.

The U.S. dollar had been under a good deal of
pressure of late, and before its most recent rally stood at a three-year
low. 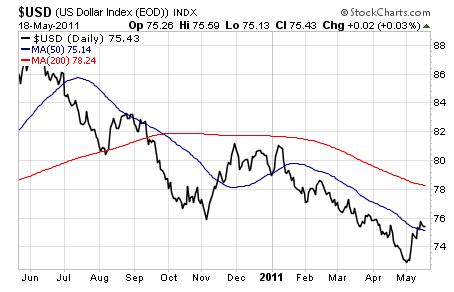 After recent strength it moved barely above its
200-day moving average. What does this mean, why should you care, and
what action can you take?

***First let’s consider why the dollar has been so
weak. Our country’s ballooning debt burden and the Federal Reserve’s zero
interest rate policy (and quantitative easing) have taken its toll on the
greenback. The weak dollar is certainly undermining the Fed’s statement
that inflation remains “transitory.”

We’re not the only ones concerned with the way
things are headed. Rumors were swirling around Wall Street three weeks
ago that China was about to revalue its tightly managed currency by 10
percent, in a bid to combat inflation. China has made such one-off moves
in the past, but doing it now doesn’t make a great deal of sense since it
would also hurt the country’s $3 trillion in foreign reserves.

Then three weekends ago the official Chinese news
agency ran a story that quoted several sources, including China’s central
bank governor, suggesting the country was prepared to drastically reduce
its foreign reserves, by as much as two thirds.

The funds would be invested more strategically,
such as to replenish state-owned capital in key sectors and enterprises,
purchase strategic resources, expand overseas investment, issue foreign
bonds and improve national welfare in areas like education and health.
This latter plan makes more sense as it would dilute the value of China’s
dollar holdings more slowly. The gradualist approach would allow the
country to diversify out of its foreign reserves, while minimizing the
damage from the declining value of the dollar.

***Now let’s connect the dots to our domestic
stock market. While US stocks have climbed to three-year highs recently,
we think big gains in the next several years will still be found in
commodities. We don’t think the dollar is going to strengthen too much to
make this scenario unlikely.

In the metals pits, gold recently climbed to a new
high near $1530 and silver finally took out its 1981 high, before backing
off dramatically. The move in silver was parabolic, rising more than 75
percent from its January low.

We’ll be the first to admit that such moves don’t
occur without periodic corrections. But we maintain both metals are
headed much higher in the long run. Of the pair, silver offers perhaps
the best upside potential, even though it is more volatile. While silver
is finding a growing list of adherents as a store of value, it is really
industrial demand that is driving prices upwards. And it is none other
than China that is leading the charge.

***Since the Fukushima nuclear disaster China has
radically stepped up its alternative energy plans, with particular
emphasis on wind and solar. In 2010, China produced more than 50 percent
of the world’s total production of solar cells and modules. Most of that
production was export. Now it’s manufacturing solar modules for domestic
usage. All of this requires silver.

China is the world’s third-largest silver
producer. As recently as 2005 it exported more than 96 million ounces of
the metal – more than 10 percent of world supply. But its demand for the
metal, for use in electronics and increasingly in solar power, has made
China a net importer of silver since 2007.

In the last 12 months alone, that demand has
resulted in a 130 percent increase in China’s silver imports. Those
imports accounted for more than 16 percent of world silver mine
production. And given the country’s plans to adopt solar power in the
next couple of years, its silver demand will continue to soar, putting
immense upward pressure on the price of the metal. So be prepared for
short-term volatility in silver, but don’t let that volatility chase you
out of your silver-related positions, your wallet will be much fatter for
it later.

***In my opinion the long-term trend for
commodities is still higher, and the long-term trend for a weak dollar is
still intact. Even though the greenback has staged a bit of a recovery in
the last week, I don’t believe the move is going to be so sustained that
it should shake investors out of their current investing strategies. And
I’m not changing mine.