It’s tempting to look at the price of a barrel of oil, or
the price of a gallon of gasoline as a way to evaluate when oil companies are
cheap.

But there’s little
correlation between oil price and profitability, value or future share price
for most of the companies in the oil sector. There are a few exceptions that
I’ll talk about in a minute…

Not to go into too much detail, but most oil companies,
large and small, hedge their production in the futures markets. When you
hedge your production, it has the effect of evening out the highs and lows in
the market.

The AMEX oil index compiles the price movement of the 13
largest publicly traded oil companies. And no, you can’t buy it –
unfortunately it’s not a traded index. 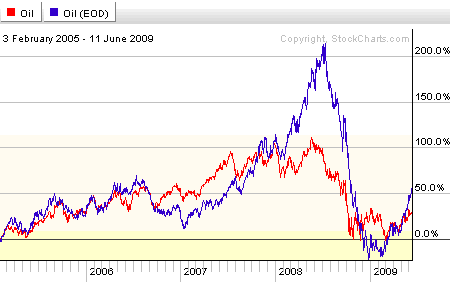 Then again, when the price of oil retreated below 2005
levels, the return of the oil index stayed positive.

Of course there are other reasons why oil companies tend to
be less volatile than oil prices, but the point stands: I’d caution anyone
from looking at oil prices as a way to know when to buy or sell oil
companies.

There’s an
exception to the rule.

The reasons these companies typically make much higher
profits when oil prices are high is that they’re incentivized to do so when
prices are higher. That’s when oil companies that require their services need
them to work around the clock to bring oil to market.

We saw these companies skyrocket much higher on a percentage
point basis than the price of oil, even as the large blue-chip producers
didn’t come close to matching gains. 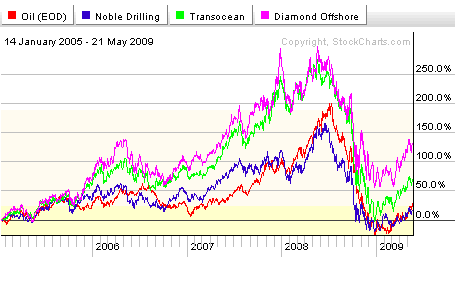 Here, I’ve plotted the price of oil (in red) vs. three of
the biggest offshore drilling companies: Noble Drilling (NYSE:
NE) in blue, Transocean (NYSE: RIG) in green and
Diamond Offshore (NYSE: DO) in pink.

You can see that Noble Drilling trades in very close tandem
with the price of oil, and Diamond and Transocean seem to do a good job of
multiplying gains in the price of oil.

The reason I bring
this point up now is that oil prices are currently stuck in a trading range
between $70 and $80. This trading range is dependent on many factors,
including oil inventory, oil reserves, the strength of the world economy,
etc.

But the point is – it won’t last. We’ll see much, much
higher prices in the next 12 or so months – and higher prices still in the
years to come – for a simple reason: the world is running out of oil at an
astounding rate, while growth in Asia is increasing demand at the same
time.

As always, do your own due diligence to find the company
that’s right for your portfolio, but I believe the oil services sector is one
of the most potentially profitable in the stock market today.