We're still in the middle of a long-term bull market in gold.

How can I tell for sure?

Well, the simplest way to know that you're witnessing a bull market in any asset is that its price tends to rise, month over month, year over year, even decade over decade.

Well, I have dozens of reasons – but today I'd like to highlight one important reason that you should be aware of if you own gold or gold securities.

First, we have to understand why people wanted to start buying gold – say, about 10-12 years ago – to kick off this bull market.

Is it because gold was cheap? 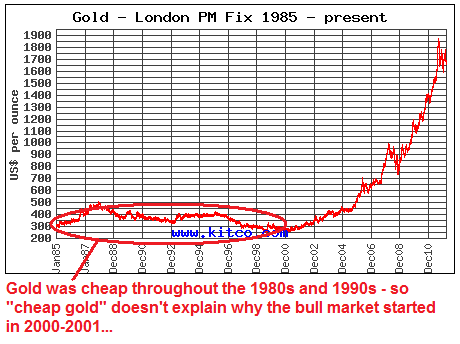 As we know, the fact that an asset is cheap is by no means a guarantee it will go up in price soon. It could always get cheaper. Just ask anyone who has been waiting for natural gas prices to rise.

So what else happened in the early 2000s?

But you might not remember the altogether confusing words of then Federal Reserve Chairman Alan Greenspan. His actions spoke louder – and more clearly – than his words.

To refresh your memory, Greenspan absolutely GUTTED the federal funds rate from 5% in March 2001, all the way down to 1.25% in November 2002. 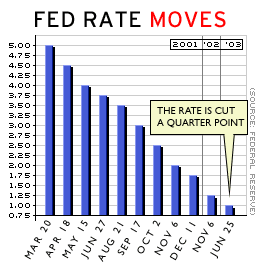 The federal funds rate is the rate member banks receive to park cash at the Fed for inter-day liquidity purposes. It's also a benchmark rate that affects everything from Treasury yields to mortgage rates.

The important effect was on US Treasuries. Real, inflation-adjusted yields on Treasuries dipped WELL into the negative in 2002 – and stayed there for the better part of the next 2+ years.

Under normal circumstances, investors like to put cash to work in low-risk bonds that pay them a positive real yield.

But when real yields turn negative, investors begin to park cash elsewhere. They put it in real assets that they know are immune from the "accommodative policy" of central bankers.

Now, I'm not saying everyone dumps Treasuries and buys gold. But that doesn't need to happen in order to spur gold higher. That's because the Treasury market absolutely dwarfs the gold market – so even a small number of Treasury ex-pats tilting scales toward gold can have a huge impact on gold demand.

According to the World Gold Council, the TOTAL demand for gold in 2011 amounted to $205 billion. But the Treasury regularly auctions off $200 billion in new issuances on a monthly basis. Only a tiny number of investors need to run from Treasuries and other traditional safe-haven investments to gold in order to drastically increase gold demand.

So, negative real interest rates in Treasuries provide a STRONG incentive for investors to put cash in gold. Why? I'll get to that in a minute…

We can see this phenomenon in action in the chart below – when inflation adjusted Treasury yields go negative, gold historically skyrockets… 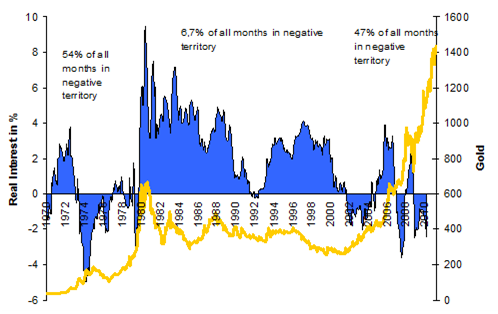 Today – you guessed it – real inflation-adjusted Treasury yields are still firmly in the negative.

When I talk about Treasury yields, I'm referring to 1-year Treasuries. So let's take a look at a couple of charts to clarify what I mean – and why investors might prefer gold to Treasuries…

Another detail to consider: we get our inflation data from the Federal Reserve and the Bureau of Labor and Statistics. These two entities have every reason to massage the numbers lower. A higher inflation means cost of living increases for Social Security recipients, Federal employees and a variety of other higher costs that the government understandably would prefer to not pay … mostly because it's already completely broke.

So I believe that the real inflation numbers could be even more bullish for gold, although we don't know for sure.  And that's the thing – this type of uncertainty about how bad it really could be only fuels the gold bull market further.

Uncertainty about "real yield" pushes people to gold. Eventually, uncertainty about the status of the dollar in general will push everyone to gold or some other non-dollar asset.

What will it take to end the gold bull market this time around?

Back in the early 1980s, it took double-digit Treasury yields to prod investors out of gold and into Treasuries. So even if real yields get back into positive territory anytime soon, they'll have to really ramp up to convince gold-holders to jump ship.

Investors err on the side of safety.  And with real negative yields on short-term Treasuries, along with at least somewhat suspicious inflation stats from the "trust me, I'm from the government" folks, investors around the globe will continue to flock to gold.  And they'll continue to do so for as long as real interest rates remain even close to negative.

P.S. I just published the 3rd issue of Resource Prospector Pro – the premium edition of Resource Prospector. In it, I discuss one more vital reason why I believe the gold bull market will resume. I also reveal my favorite gold investment of the moment. You can check out the current issue by taking a $5 trial subscription. Just $5 gives you total access to back issues and special reports as well. It's worth a look…