People in the financial world frequently call for the end of ongoing bull markets. There’s a cottage industry of prognosticators trying to make their mark. If you become "the guy" or "the lady" who publicly calls a market top or bottom – you can write your book, sell your website, get on CNBC, and retire rich.

We’ve seen this story played out with folks like Peter Schiff, Meredith Whitney, Nassim Taleb, Nouriel Roubini, and several other people who correctly predicted the housing crisis and the ensuing fallout.

Now, don’t get me wrong – I really like those guys (and lady), and I think they’re all very talented, intelligent and amazingly prescient market analysts.

But the fact remains: there’s a huge incentive to correctly predict where the market will go next. No one knew any of those folks before the financial crisis – now they’re all much, much more rich and famous.

My point is that it’s kind of pointless to listen to any market analyst (even me) when it comes to predicting what will come next. As for me, I’ve infamously turned down many television and radio appearances – much to the chagrin of my boss. I just don’t have a desire to go on TV to prattle on about what I think – especially since there’s really no fame or fortune to be had when you tell people that a bull market will continue.

People only really respond to the top and bottom predictors. I’m not predicting a top in commodities for the foreseeable future, simply because I can’t really know what will happen next week, let alone next month.

As commodity investors, we do have some very large signposts to pay attention to. They can be extremely helpful in telling us whether we’ve gone too far yet.


The biggest one is the U.S. Treasury market.

The Treasury market can tell us many things about many sectors. Right now, it’s telling us that the Federal Reserve is dead-set on continuing its suicide pact to keep rates low.

Take a look at this chart which shows the frequency of different 10 year Treasury rates:

Thanks to the folks at Observations and Notes for compiling this chart.

What can this chart tell us about commodities?

Well, it tells us that we’re in bizarro-world territory for Treasury yields. Ten year Treasuries almost never yield this little.

Rates are bound to rise – which is almost always terrible news for bonds, stocks, housing – even commodities.

But rates are so painfully low right now that they would have to double before we even got back to a normal range. They’d have triple before we got to a range that’s typically bad for commodities.

For a frame of reference, here’s a chart showing 10 year bond rates going back to 1900: 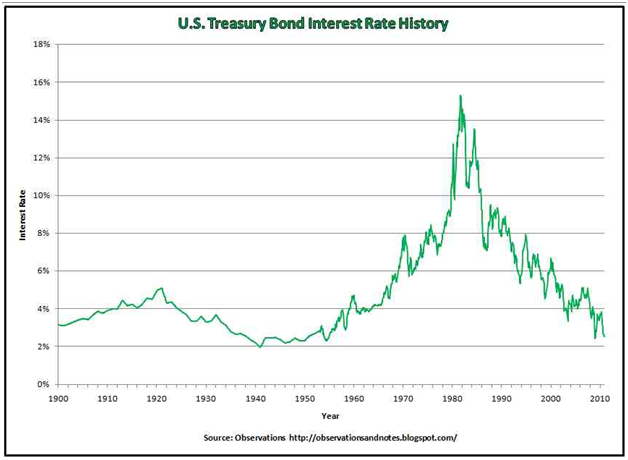 You’ll notice that rates were four times higher than they are today when the last commodity bull market began losing steam.

That’s not a coincidence. It’s a direct causation: when your savings account yields 6% per year or more you tend to sock money away. When it’s yielding a negative rate after inflation (as it is now, and as it did throughout most of the 1970s) you tend to want to own real assets which benefit in price from inflationary policy.

"But wait," I know some of you are probably thinking, "can’t rates be high and STILL be net negative after inflation?"

Yes. But higher rates make it much, much more expensive to be a borrower, which makes it increasingly untenable for the government to continue to borrow and otherwise pursue inflationary policies.

When rates are low, there’s no practical constraint to rein in spending or inflationary policy.

In any event, I think we’re still a couple years away from significant changes in interest rate policy – let alone the kind of changes needed to kill the commodity bull market.