It’s true that the United States and most American citizens are in a truly terrific amount of debt.

But the market is infinitely more complicated than most people think.

And in one of those strange twists, while the whole world seems to be circling the drain in debt – American savings deposits are through the roof.

Don’t get too excited – the current debt levels still dwarf our saving.

But with the fiscal cliff looming, and a variety of other “uncertainties” plaguing the market, people seem to want to save in the safest way possible…

So much so that in the past four years since the start of the financial crisis (which, you might recall, centered around banks) deposits have nearly doubled from $3 trillion to nearly $5.5 trillion! 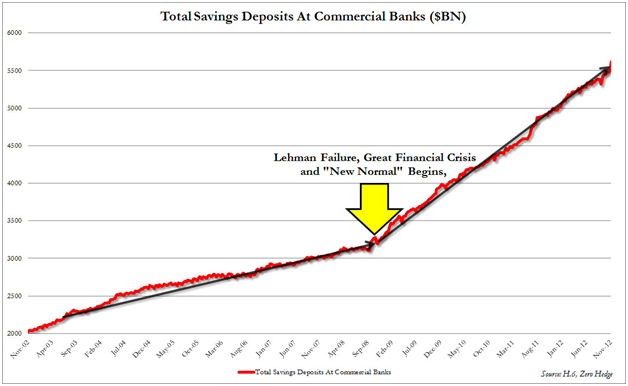 Now, these savings deposits, though they’re not one single entity, are the most liquid and largest pile of dollars in existence.

What do you think will happen to this giant pile of money when one of the following inevitable scenarios plays out?

The answer is commodities.

All of this money will someday come crashing into the commodity space. It will be joined by money fleeing the Treasury market (when rates rise and Treasuries crash) as well as money fleeing stocks (when taxes rise on corporations, capital gains and dividends).

The masses will realize that the only sane place to store their savings is in an asset class that the government can’t inflate away – and that indeed benefits from their efforts to inflate the currency to pay down debt.

They’ll also be inclined to buy portable stores of wealth (like gold and silver) which are harder to track and tax.

But one thing is for sure: savers will not stand idly by and watch their savings get wiped out by taxes and inflation. If that were the case, (as I’ve said numerous times), then Zimbabwe would be Switzerland.

It’s good news for investors who buy and hold commodity assets today – and it’s also a stark reminder to not be fooled by the short-term head fakes that might make it look like the commodity bull is over.

Stay the course – the biggest profits are yet to come. And there’s $5.5 trillion reasons why…