In Good Company
My favorite indicator
A 10.1% dividend

Last Thursday, April 1, I talked about how inexpensive natural gas was getting. If you bought natural gas last week, it was the equivalent of buying gasoline for 48 cents a gallon.  Prices had to go up.

It’s good to know I wasn’t alone in my proclamation, as both
the Daily Profit editor, Ian Wyatt and Trademaster Daily Stock Alerts editor Jason Cimpl noticed
the same trend. Ian is my boss and CEO
of Wyatt Research – as well as one of the best fundamental analysts I’ve ever
met or worked with. Jason is a
wunderkind technical analyst and is frequently one step ahead of the
market. They don’t always agree, just
because they have different time-lines and different investment philosophies –
but when they do agree, it’s a good idea to take notice.

And in Friday trading, gas prices bounced off their six month lows.

The good news is I expect similar jumps in the price of
natural gas in the coming weeks. In the
long term, I think we’re in for a long, slow climb upwards from last week’s
bottom.

And for the short term, there’s one very good reason natural
gas will rise in price:

Mean reversion.  It’s probably my favorite buy-indicator. I talked about it in this
article referencing the gold-silver ratio. (Silver prices are up 50 cents since then – in line with my prediction.)

Mean reversion sounds complicated, but it’s basically just a fancy way of saying,
“eventually, this ratio moves back to its historical average.”

And right now, the crude oil-natural gas ratio is “out of
whack.” In the chart below you can see
how the ratio is nearly three standard deviations away from the norm. 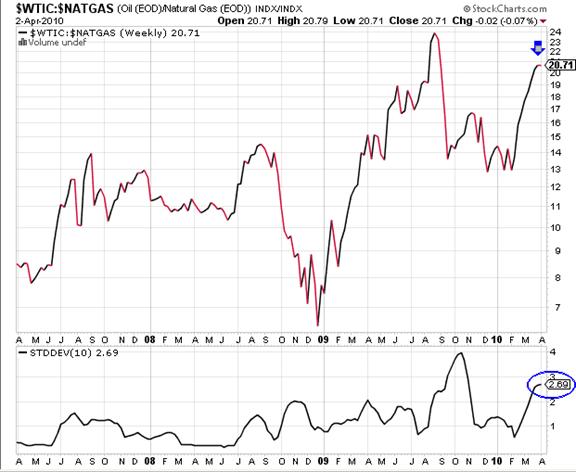 So right now, the ratio is trading 95% higher than its average. It could go higher. But it’s much likelier that it will go lower
in the short term – and there’s a very high likelihood that it will go lower in
the long term. It’s only been this high
once in the last three years, and it immediately dropped back to normal. Natural gas prices nearly tripled in just 6
weeks.

I don’t know if they’ll triple this time – but I think we’ll
see significant gains.

Over the long term, there will probably be retracements close
to the $4 level, but like $900 gold – I don’t think they’ll be very frequent or
long lasting.

Right now, I’m not suggesting you go out and open up a
futures account on the NYMEX or the CME. You can buy cheap natural gas much more easily by purchasing shares of
natural gas producers.

Last week I suggested looking into Hugoton Royalty Trust
(NYSE: HGT). It’s up nearly 3% since my
mention. It pays a 10.1% dividend – so a
$1000 stake will pay you $110 a year – enough to cover a few tanks of
gasoline. There’s also upside potential
as natural gas prices rise. I wouldn’t
back up the truck on this one, just because royalty trusts can fall just as
quickly as they rise. Any supply or cash
problems from Hugoton’s royalty payers would hurt this stock, but it’s
worth a look as a more speculative play on rising natural gas prices.

If you’re more interested in a best-of-breed blue chip
natural gas company, Energy World Profits Chief Analyst Ian Wyatt recently
added to the portfolio what I consider to be the Exxon (NYSE: XOM) of natural
gas. They’re the second largest producer
of natural gas in the United States,
and they have diversified reserves in four different locations: Texas, Pennsylvania, Arkansas and Louisiana.

Having all of this domestic production is a real boon for
the company. They don’t have to worry
about tariffs, or nationalization. They
can pump supply right in to the domestic market without getting permission from
other states or world governing bodies. It’s all in-house. If you
remember the kerfuffle between Russia
and Eastern Europe last winter regarding the
Russian natural gas pipeline, it’s easy to see why you’d want to avoid dealing
with foreign governments if you’re a natural gas producer. Even Canada
has been known to make things difficult for producers in Alaska
who want to sell their gas to the continental U.S.

Right now, with the oil to natural gas ratio 95% higher
than normal, I can’t think of a better time or a better way to get started investing
in natural gas. Click here to find out more about Energy World Profits. If you’re a commodity investor, this company could be
the best way to ride today’s natural gas bull market.